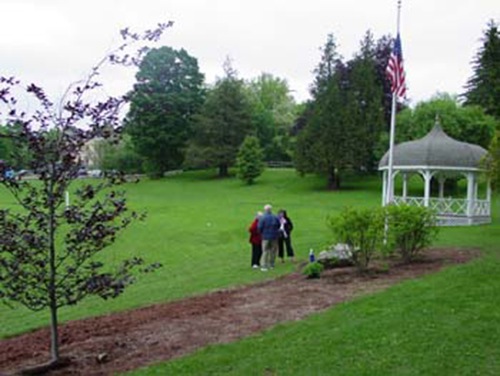 Purpose: A memorial to Peter Hanson, his wife Sue, and their two-and-a-half year old daughter Christine who were lost on September 11, 2001. According to father Lee Hanson, his son's family were residents of the town of Groton, and immediately after the event, people began to leave flowers, stuffed animals and remembrances at the Hanson home. Some residents of the town who did not even know the Hansons expressed a desire to do more, and noting all the trees and landscaping on the Hanson property, they thought it fitting to create a small memorial garden. These residents got permission to place glass jars soliciting donations around the town. They were so overwhelmed by the donations that poured in, that they had to form a committee to manage the funds. Moreover, many of the contractors involved donated their services. As such, there were significant funds left over which went to fund Red Cross counseling services that were provided to a woman from Northhampton who had witnessed the attacks while living in Lower Manhattan. The Hansons celebrate that this community effort was able not only to create a beautiful memorial, but also to support another person in a time of need.

Reason site was selected: The garden is located adjacent to the Lawrence playing field in an active park just behind the library and near the town hall, in the center of town. There is also a bandstand and a playground, where Christine used to play.

Events planned for site: The memorial was dedicated 40 days after September 11 with several hundred community members in attendance, a youth choir, public officials, and local ministers speaking. Eunice and Lee Hanson continue to visit the memorial when they are in Groton, and have learned from residents that there is a town employee who comes to sit there some times, residents have planted flowers, and they suspect a local convent has donated the memorial candle holders that now decorate the site. Moreover, its presence in an active park ensures that there will continue to be active play and community concerts surrounding this solemn site.

Do you believe your memorial is a sacred place?: Lee Hanson replied that while not sacred, the Groton Memorial makes an important statement from an American Town whose sons and daughters fought in every conflict since the War for Independence and who consider Peter, Sue and Christine to be among the first to die in this Terrorist War. The plaque, adorned with an American flag and our children’s names states “Groton Will Never Forget”. Eunice added she “considers this as a special place, a reminder of the innocents killed on 9/11, while Ground Zero will always be sacred to us.”