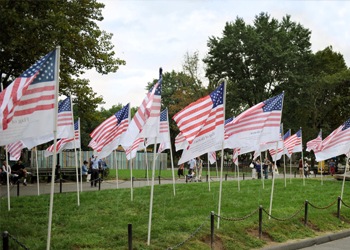 Police, fire, EMT and other rescue workers that died in service on September 11

The Freedom Tree Memorial honors police, fire, EMT and other rescue workers that died in service on September 11. Reason site was selected: This site was selected because the 25 trees were already planted several years previously at the Knoxville High School. The species are "Fire" Crabapple and "Ash" trees planted in two long rows, making the site particularly suitable as a WTC memorial. The student organizer, Laura Froyen, sought to dedicate the trees as a living memorial space and a reminder to the public. While plaque lettering can rub away, Froyen noted, trees are much longer lasting. Events planned for site: John Mixon of NYFD Engine Company Six made the trip to Iowa to speak at the dedication, along with seven other speakers. The event was attended by all the local police, fire, and EMT workers, as well as over 2,000 members of the community, and was covered on the front page of the local press. Flags were installed, decorative flower beds planted, and commemorative plaques placed at the base of trees with the names of emergency workers that were lost. Do you believe your memorial is a sacred place?: Respect for the purpose of the tree planting makes them a sacred space. While once school children vandalized the trees, now there is respect for and attention paid to the space.