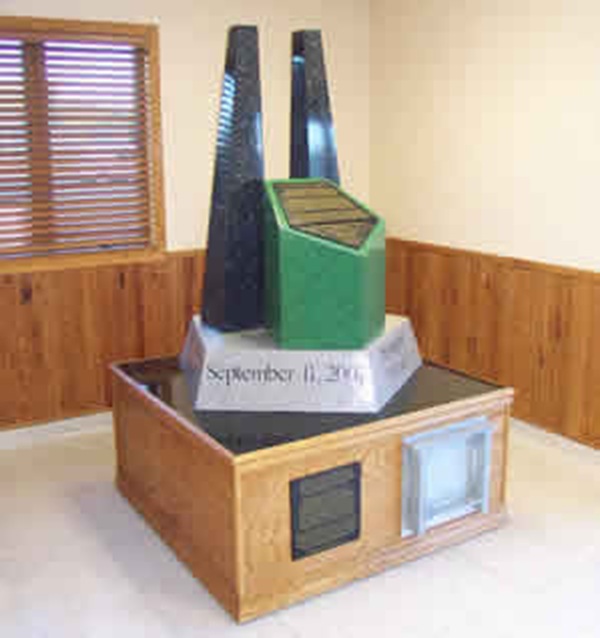 The Plaque reads:This steel cross section was cut from a box column retrieved from the rubble of the World Trade Center in New York City. The column came from the 65th floor of one of the towers destroyed by terrorists using two hijacked jetliners on September 11, 2001. The Oak Ridge High School Student Council of Oak Ridge, Tennessee, and the U. S. Army Corps of Engineers dedicated the column for plaques in capital cities around the nation as a permanent memorial to the approximately 2,820 people who died in the attack and rescue effort. The Pentagon was also attacked using another plane, and 184 people were killed there. A fourth plane was hijacked and heading for Washington, D. C., when passengers rose up to foil the plan of the terrorists. All 40 died when the plane crashed in Pennsylvania. Student leaders in the State of Wisconsin, working with others around the country, hereby establish a portion of a collective monument to the resolve of the people of the United States of America who bound themselves to end this world menace. May these remnants inspire the people of the world in the advance of freedom and the destruction of evil.

Segments of WTC steel are to be placed with memorial plaques in the capitals of all 50 U.S. States as well as Puerto Rico and Washington, D.C. Each state's memorial will be created with money raised from local students participating in the WTC Steel Foundation's September 11th National Memorial Plan. Wisconsin's Memorial was dedicated in September, 2005.