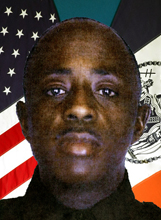 Det. Charles G. Gittens, Jr. retired on April 1, 2003 out of the Intelligence Division’s Executive Protection Unit. Gittens joined the New York City Police Department on January 3, 1983. A 20-year veteran of the NYPD, Gittens served in several commands, including the Police Academy, the Medical and Extended Leave Desk, the Drivers Education and Training Section, and the Intel Executive Protection Unit. He made 31 arrests over the course of his time with the Department and was recognized twice for Excellent Police Duty. Gittens died on November 28, 2014 as a result of his work on the rescue and recovery from 9/11.

God sent his Angel of Peace and Rest into Bayhealth Kent General Hospital on Friday evening, November 28, 2014 and set Charles free after a courageous battle of a short term illness.

Charles, (affectionately known as Corky or Charlie), was the beloved son of the late Vernice Eaves Gittens and Charles Gilbert Gittens, Sr. He was born on December 28, 1954 in Ft. Dix, New Jersey.

Corky was raised in Brooklyn, New York and received his education through the New York City Public School system. He graduated from Jefferson High School in Brooklyn, NY.

As a youngster, he was confirmed at St. Ambrose Episcopal Church in New York City and served as an Acolyte.

He joined the Army National Guard right after graduating from high school, becoming a member of the 719th Transportation Unit under the 369th Transportation Battalion as a truck driver, and worked his way up to Company Commander. Charlie also attended Officers Candidate School, graduating as a Lieutenant and retired as a Major after 23 years of service.

Simultaneously with his service to his country, he was employed by the NYC Transit Authority as a bus driver and a train operator. With a strong desire to become a police officer, he joined the NYC Police Department in 1983, retiring as an NYPD Detective after 20 years of service.

He was married to the love of his life, Raynel, for 31 years and after his retirement, the loving couple relocated to Camden-Wyoming, Delaware, where they made their new home. Charles' last place of employment was at the Veterans Administration in Wilmington, DE.

Charlie was a lover of people and never looked at anyone he met as a stranger. He had a charisma and intelligence that got people's attention. He was an honorable person and had an innate sense of humor that affected everyone he came in contact with. He loved his family, loved being a grandfather, and always made us feel safe because he had our best interest at heart and we know that his life's dedication was his family and the police department. He was also an avid Yankees and NY Giants fan and loved traveling and going on vacations.

Charlie will be fondly remembered for his zest for life, love of family, his strength and his generous caring spirit and he'll be greatly missed.