Article about Christian and his life 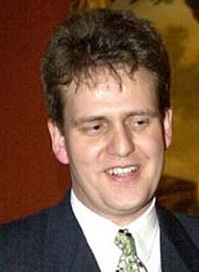 It turns out that Adams was a Fulbright scholar, and so his fate is of special interest to the German Fulbrighters who publish the blog Atlantic Review. Joerg of the Atlantic Review has a great post on how Christian Adams was defamed in the American feature film United 93 - something that nearly every US critic missed in their (generally positive) reviews of the movie.

Christian Adams, a prime promoter of German wines as deputy director of the German Wine Institute, a quasi-governmental organization, died on Tuesday aboard the hijacked plane that crashed in southwestern Pennsylvania, the institute said. He was 37. Mr. Adams was going to San Francisco for a trade show of Germany's 2000 vintage. On Monday he participated in a similar show in New York sponsored by the institute's local German Wine Information Bureau. At the institute in Mainz, Mr. Adams directed the export department, which is responsible for the multimillion-dollar international promotion program. He was given the post in 1995, six years after joining the institute. He earned a degree in enology at Geisenheim, the leading winemaking school in Germany, and a marketing degree at its American counterpart, the University of California at Davis. His survivors include his wife, Silkie, and children, Lukas, 7, and Theresa, 5, all of Bad Kreuznach; his father, Dr. Karl Adams of Neustadt, who was a retired Rheinland-Pfalz wine official; his mother, Erika, of Neustadt; a sister, Ulrike Weyand of Ingelheim; and a brother, Peter, of Los Gatos, Calif.