I'm very sorry for the loss

I'm very sorry for the loss of your daughter she was young and pretty. I can't really say I understand what your going through because I'm not in your situation is a lot tougher then mine but I do feel your pain and I have had a lot of family members who were killed and didn't deserve it and with no warning. She probably had lots of dreams and goals she wanted to accomplish she had a life she wanted to live.

Posted by Alize B.

Dear Family and Friends of

Dear Family and Friends of Christy Addamo,
We are high school students anf learning about the events that occurred on September 11 2001. We are so sorry that you lost a very special loved one on that day. We read information about Christy like how she loved to swim with the stingrays and was a NY Yankee fan. We especially like how much she loved her family and he special bond with her mother. Please know that your loved on is being remembered and honored today! Blessings to your family

Ten years ago on September 11, were an innocent victim of a vicious attack. I am deeply sorry you and others were killed on that terrible day. In a way it has strengthen America it has brought us together in so many ways. If I could say one thing to you your death was not in vein. Although it has been ten years we will not forget your death or the ones who died alongside you. May you rest in peace.

A tribute to Christy 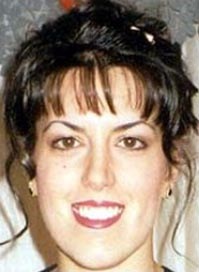 Christy A. Addamo: A Traveling Homebody Published: May 5, 2002   Christy A. Addamo was beautiful. She had big dark eyes and brown hair as shiny as mink, which she liked to have her mother, Rita, fix in an upsweep. And smart: she made the dean's list at Queens College, where she got a degree in accounting that led to a job at Marsh & McLennan on a high floor of the World Trade Center.     Brave, too: she loved to travel, to places where she could swim with stingrays. She also liked to be home, learning Italian cooking at her mother's side. She melted chocolate and poured it into umbrella-shaped molds that became lollipops served at her friends' bridal showers. At 28, she had begun thinking about being a bride herself one day. She had a pack of friends, who accompanied her to Yankees games (she liked Paul O'Neill, and saw him and the rest of the team capture the 2000 World Series) and on long walks around the city (she kept a pair of sneakers at the office).     For birthdays and other milestones, she would compose poems. For her parents' 25th wedding anniversary, she and her sister organized a big party. At Christmas, she took the whole family to Radio City for a show.     "Ah," her mother said the other day, remembering. "She was the best."