Was one of my best buds

Your dad was a good guy.

In Remembrance
Photos of Edward 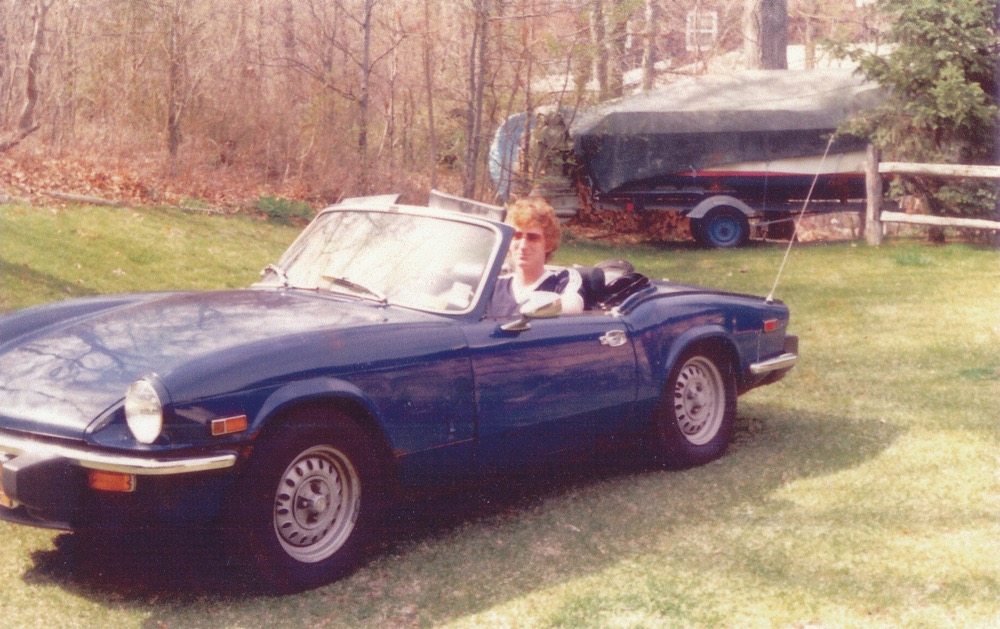 Edward in his car 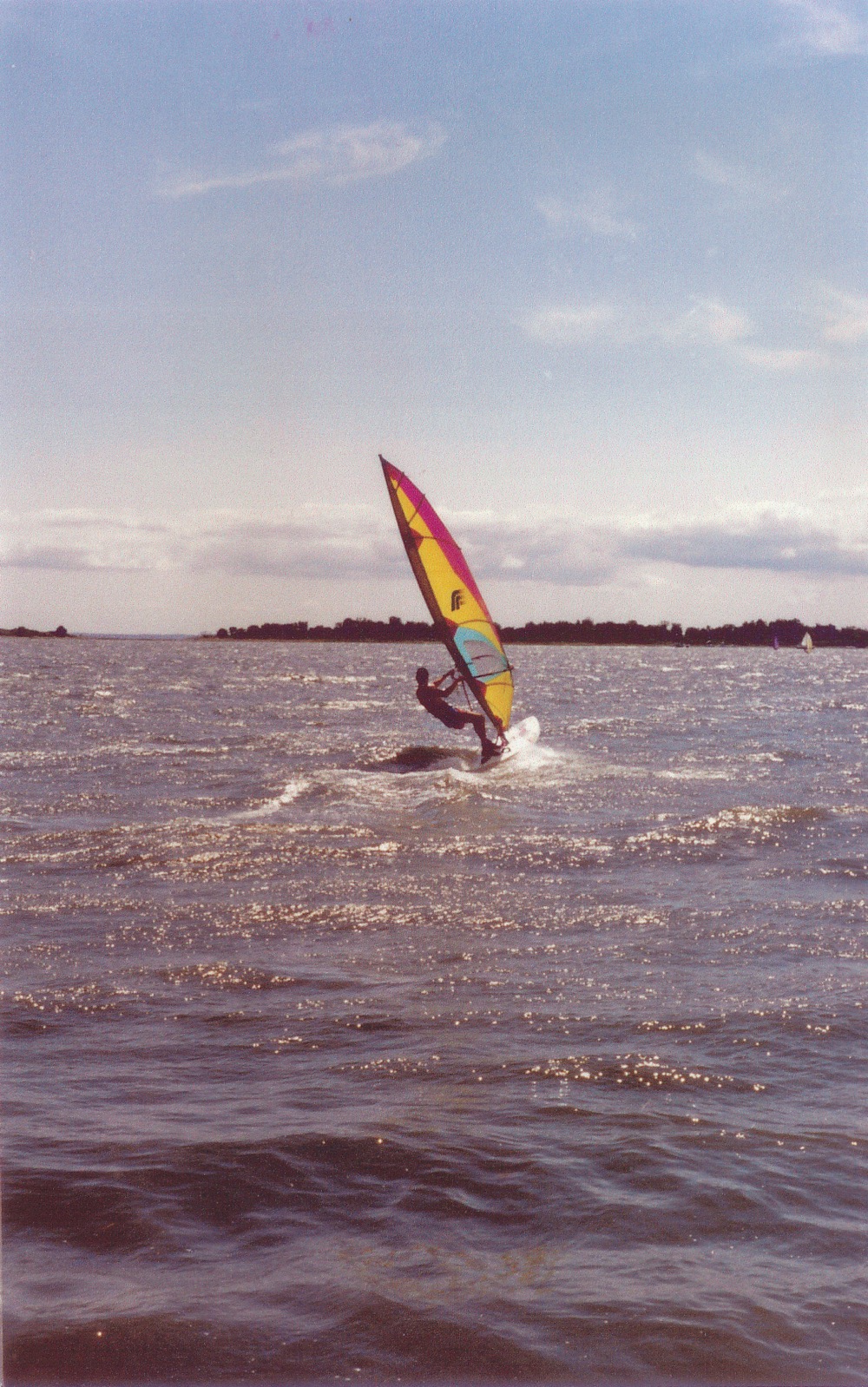 A photograph of Edward windsurfing 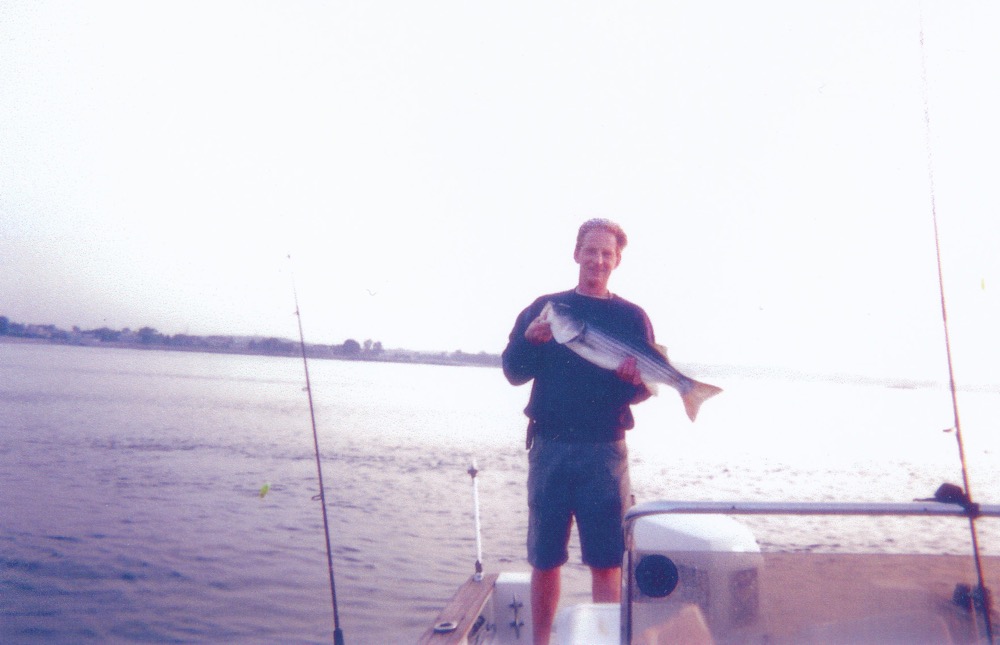 A photograph of Edward fishing 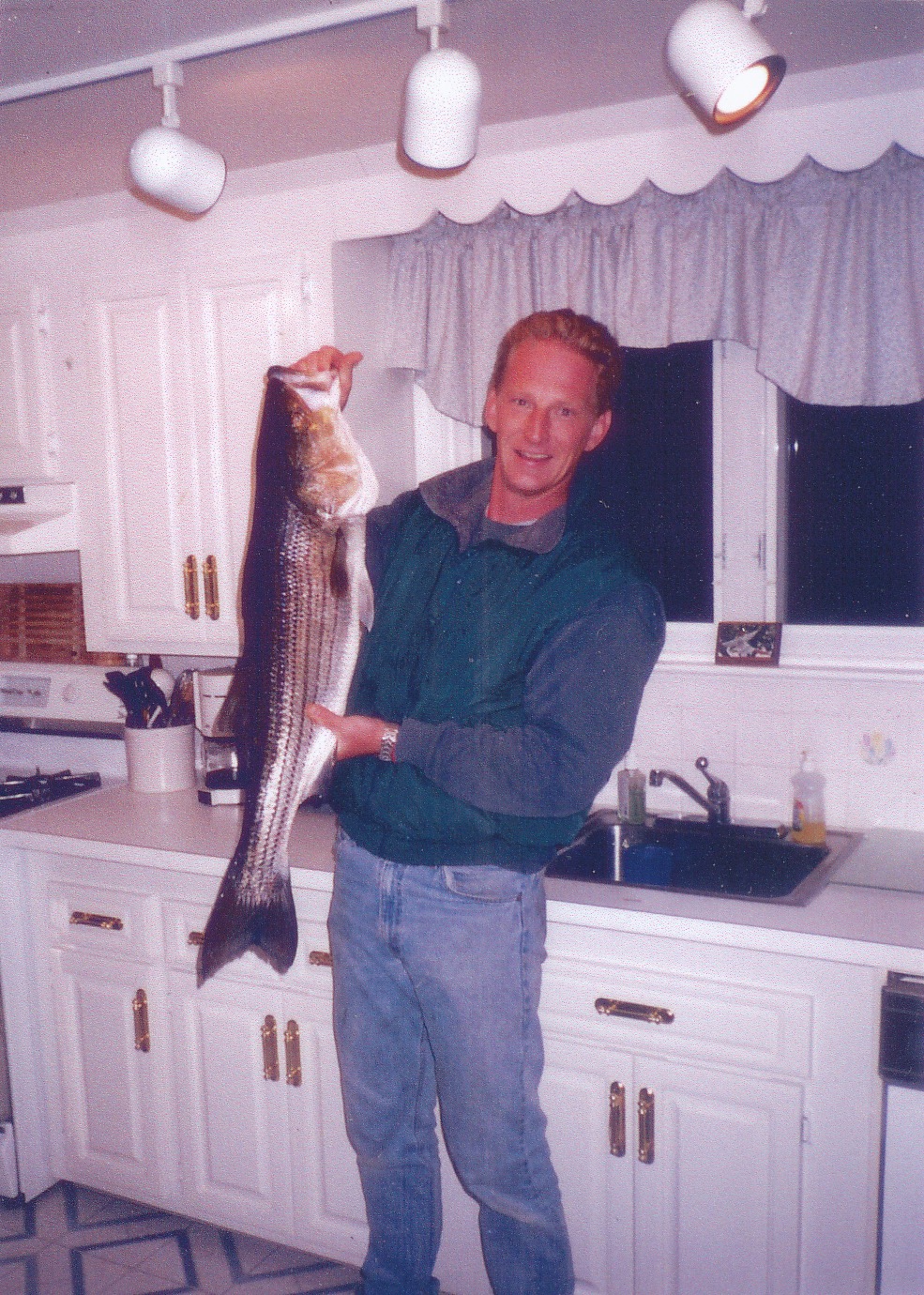 Edward showing off the fresh catch 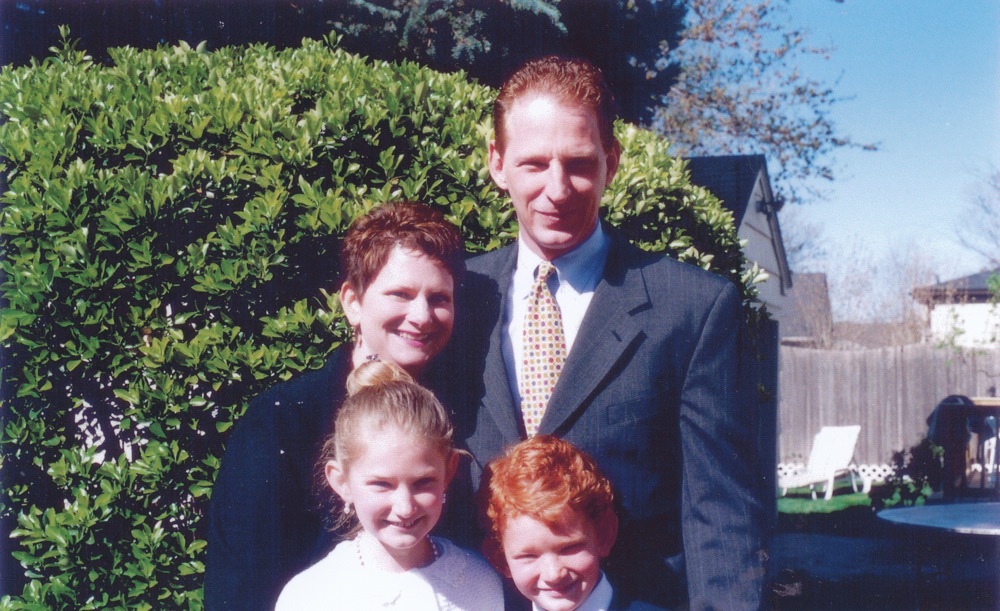 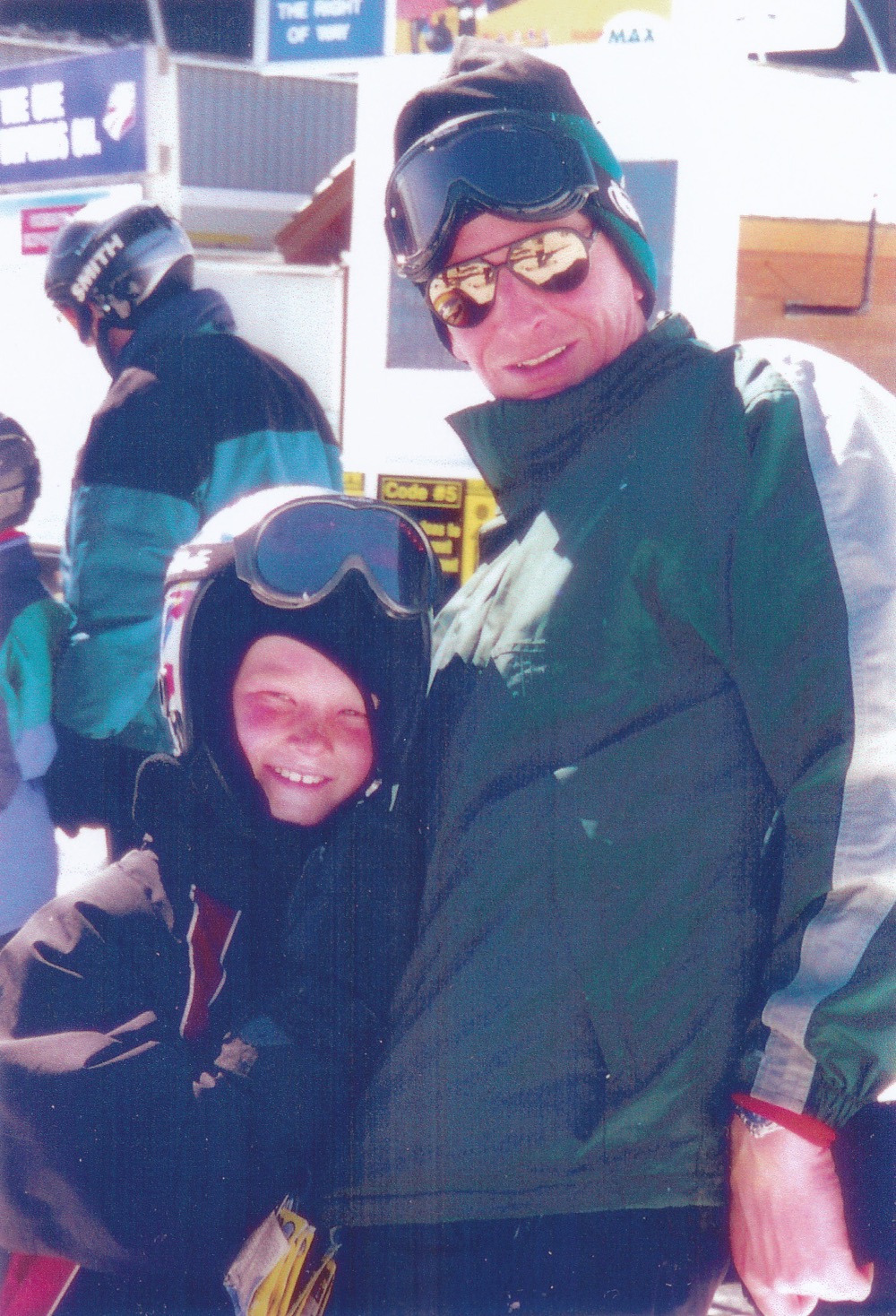 Edward and Tom after a fun day on the slopes. 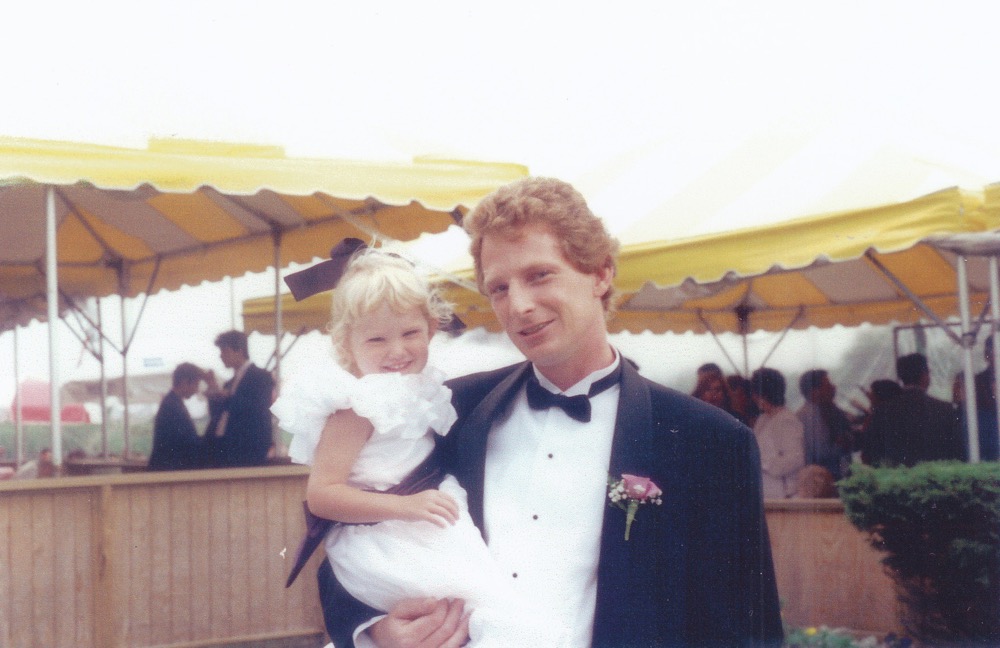 Edward and his daughter Shannon 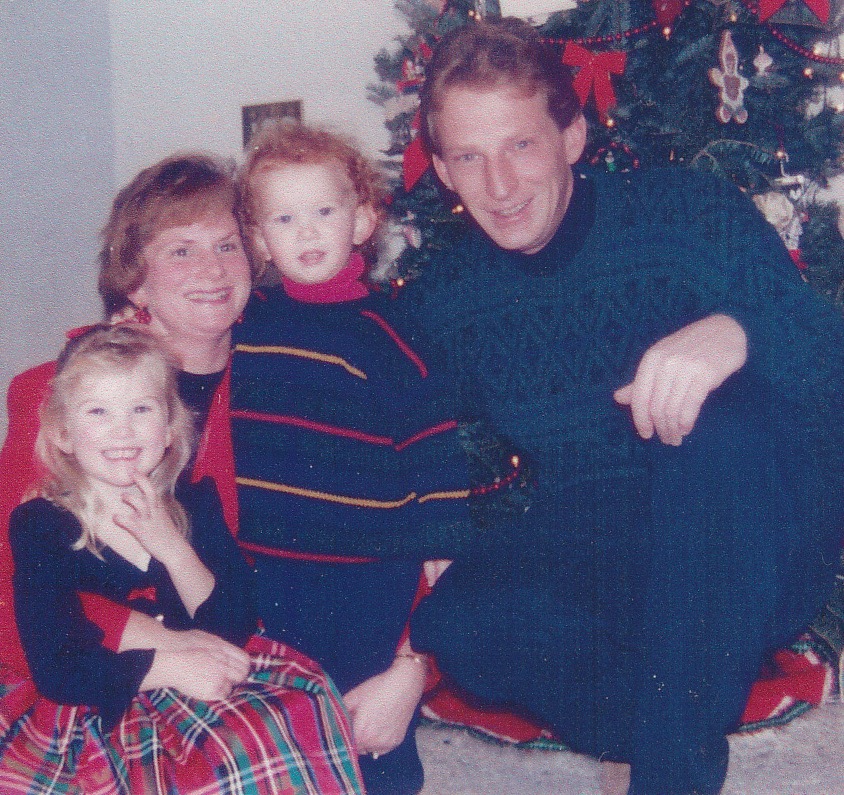 Edward, Shannon and Tom during the holidays 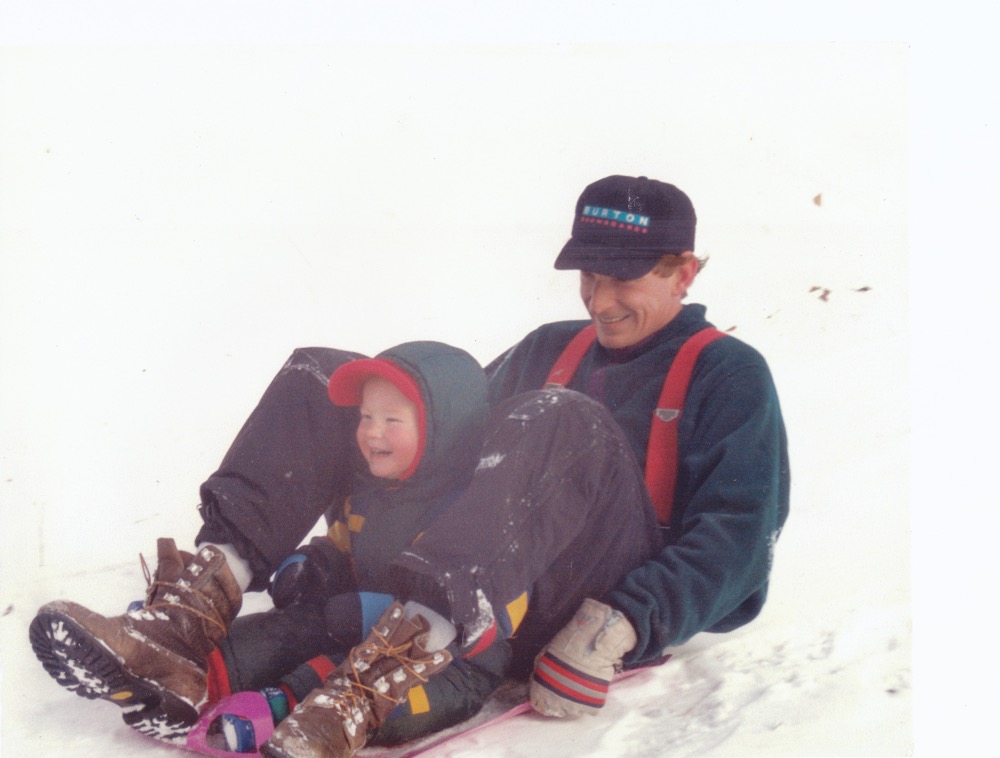 Edward sledding with his kids

A photograph of Edward skiing 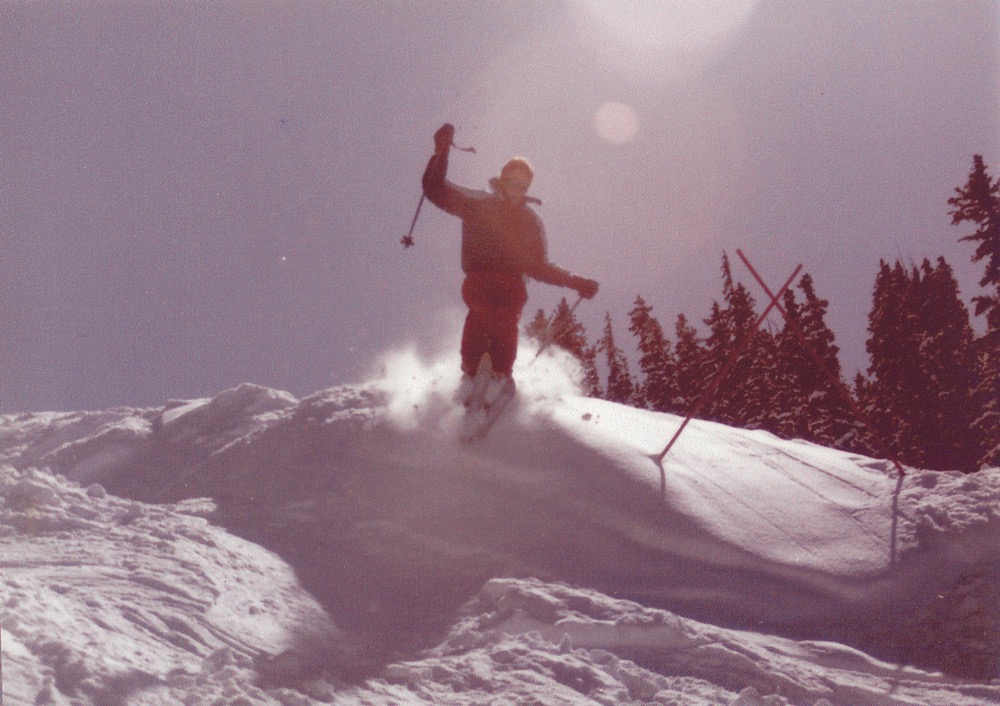 Edward enjoying one of his favorite outdoor activities, skiing 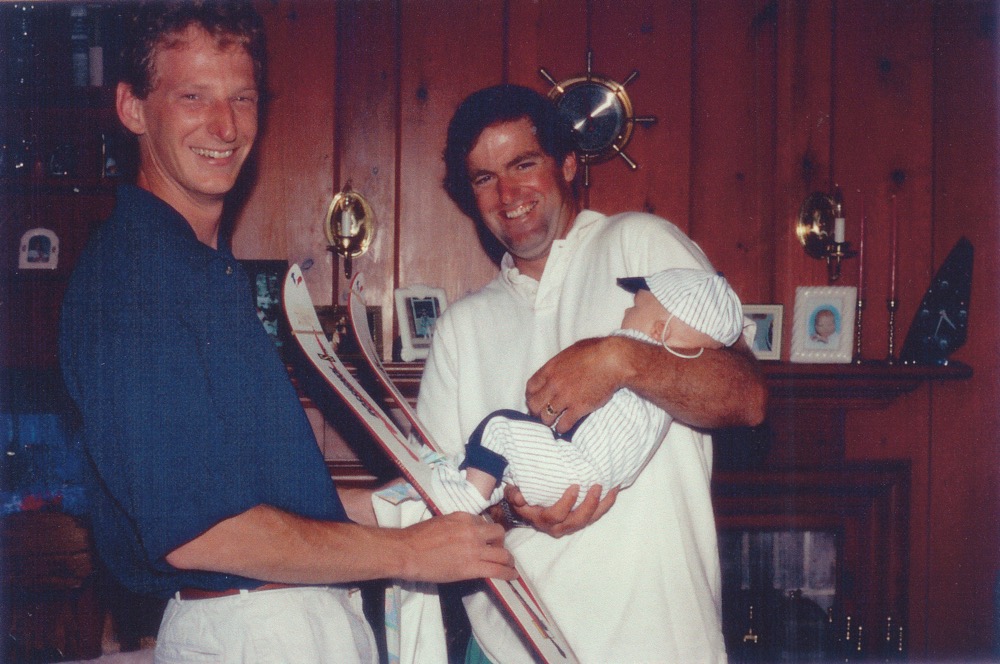 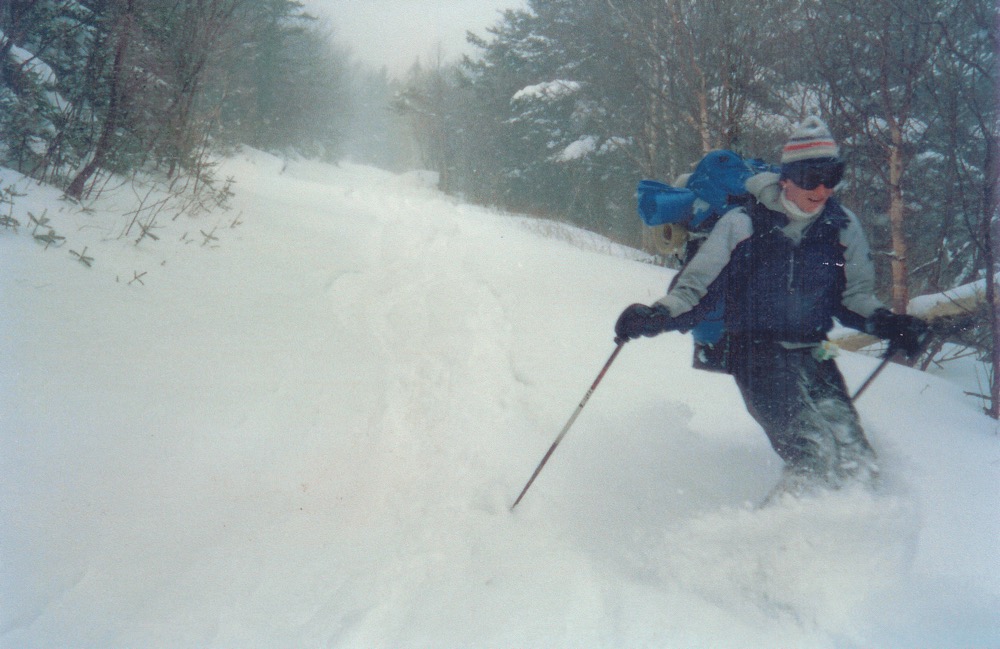 A photograph of Edward skiing 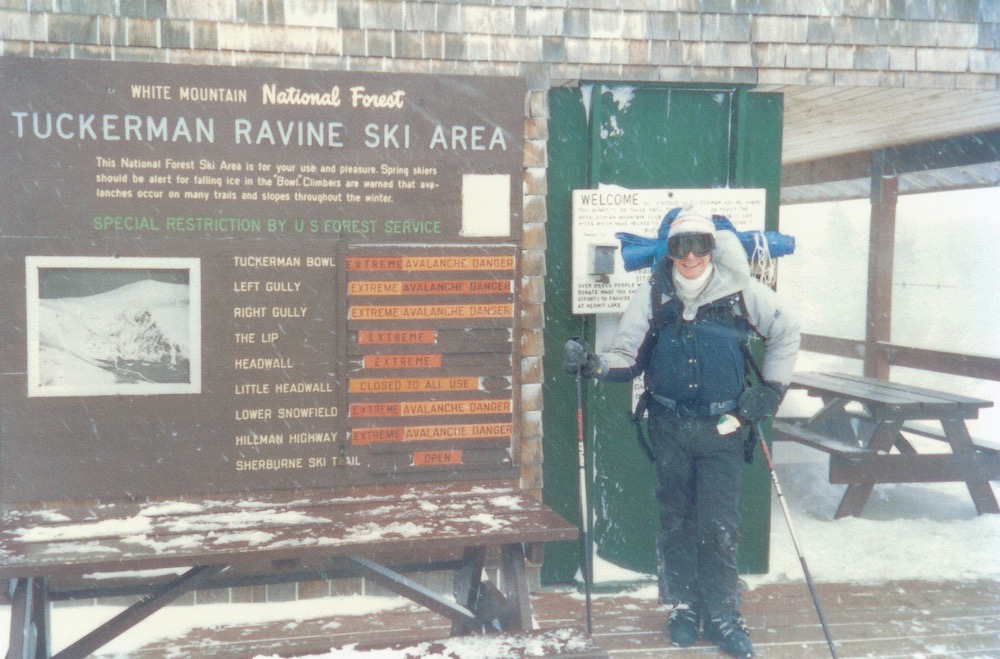 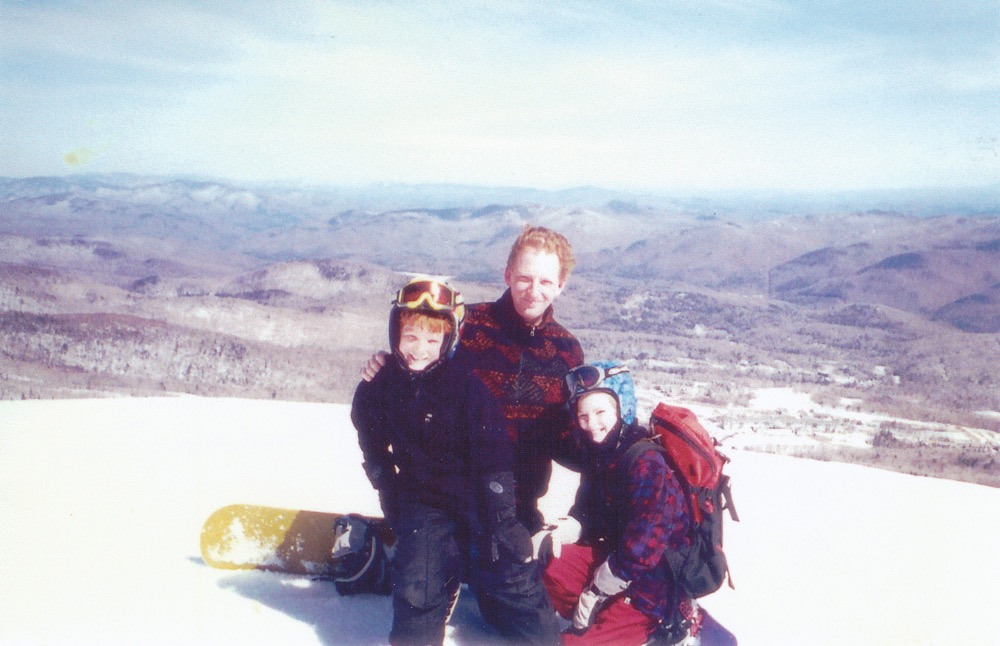 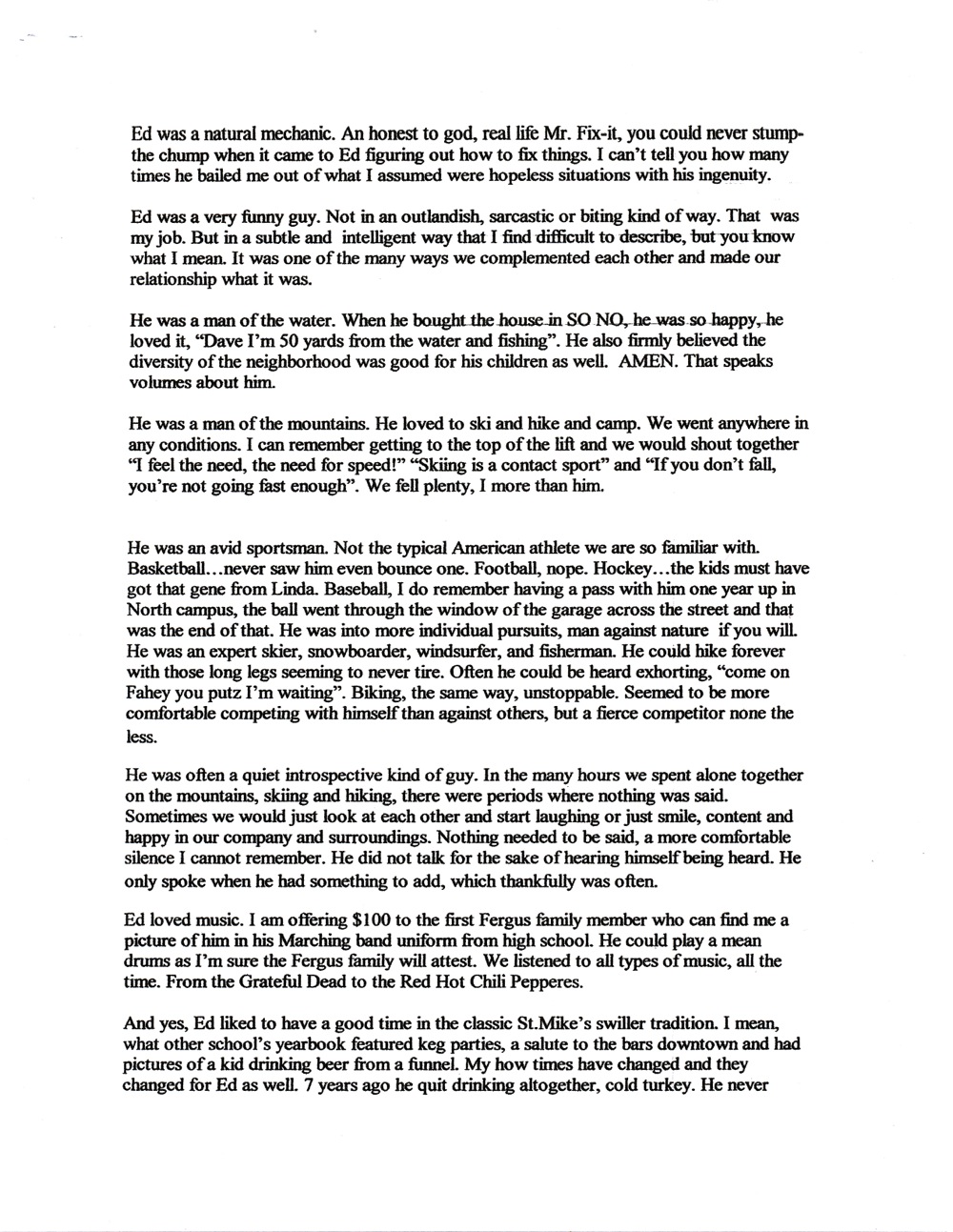 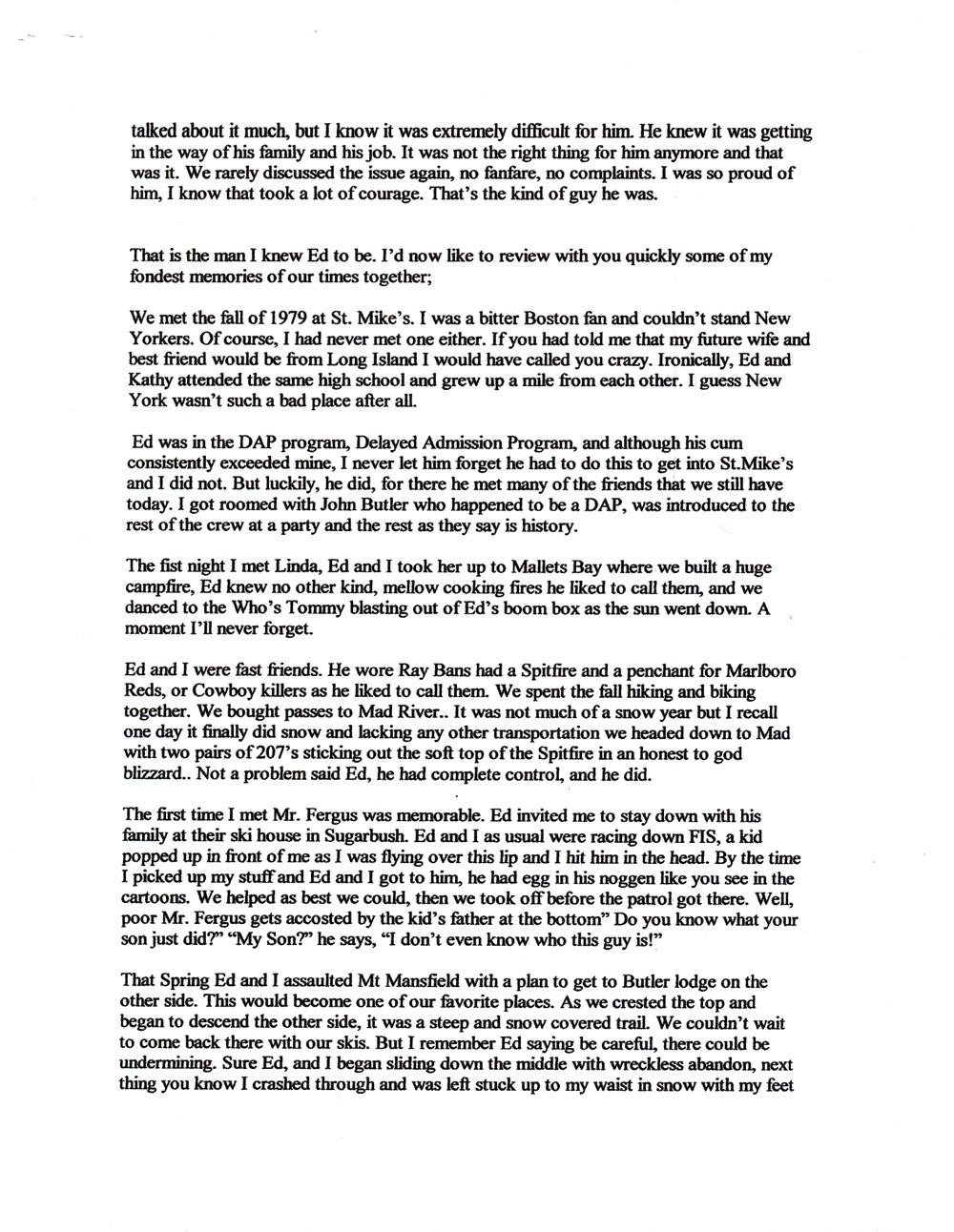 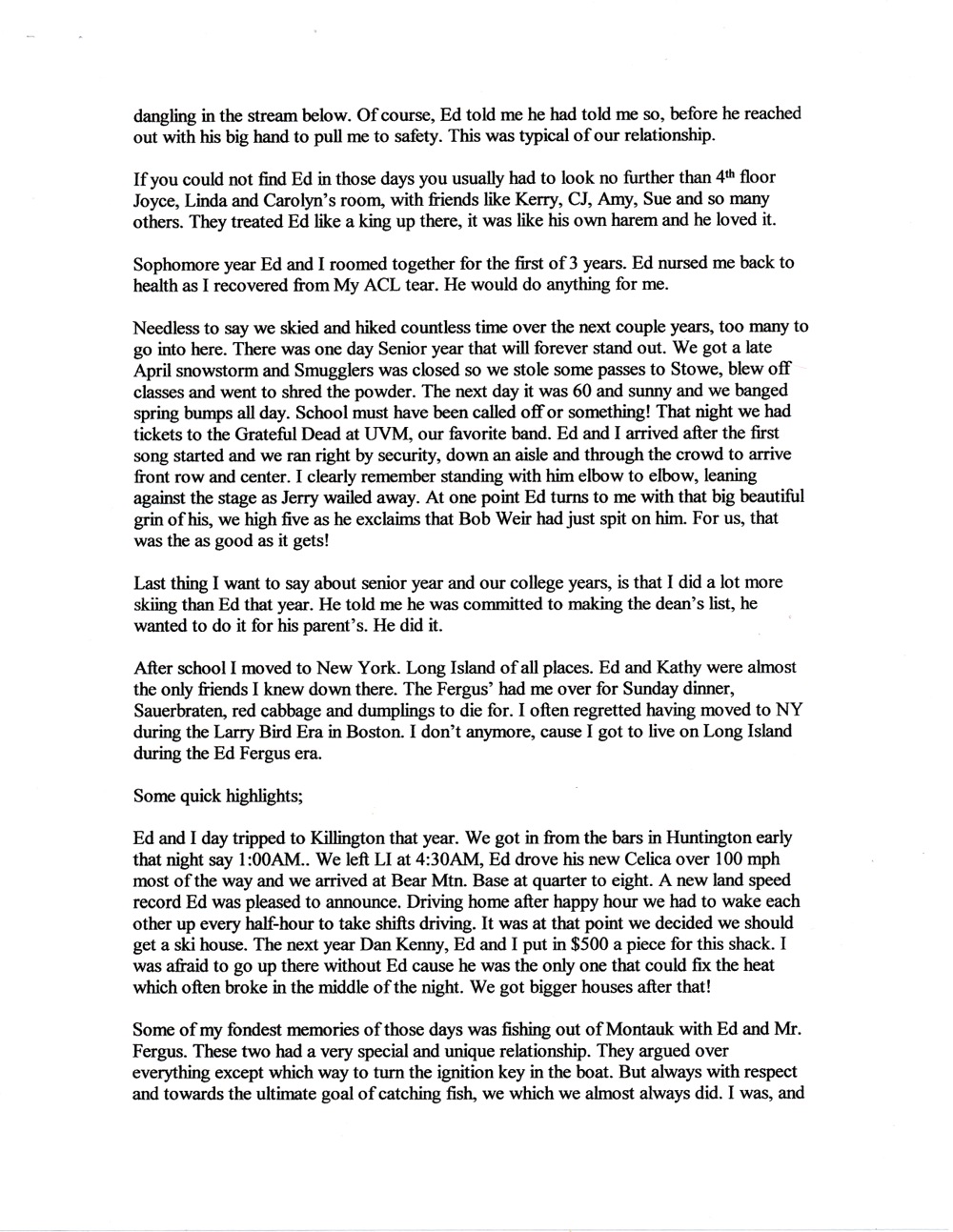 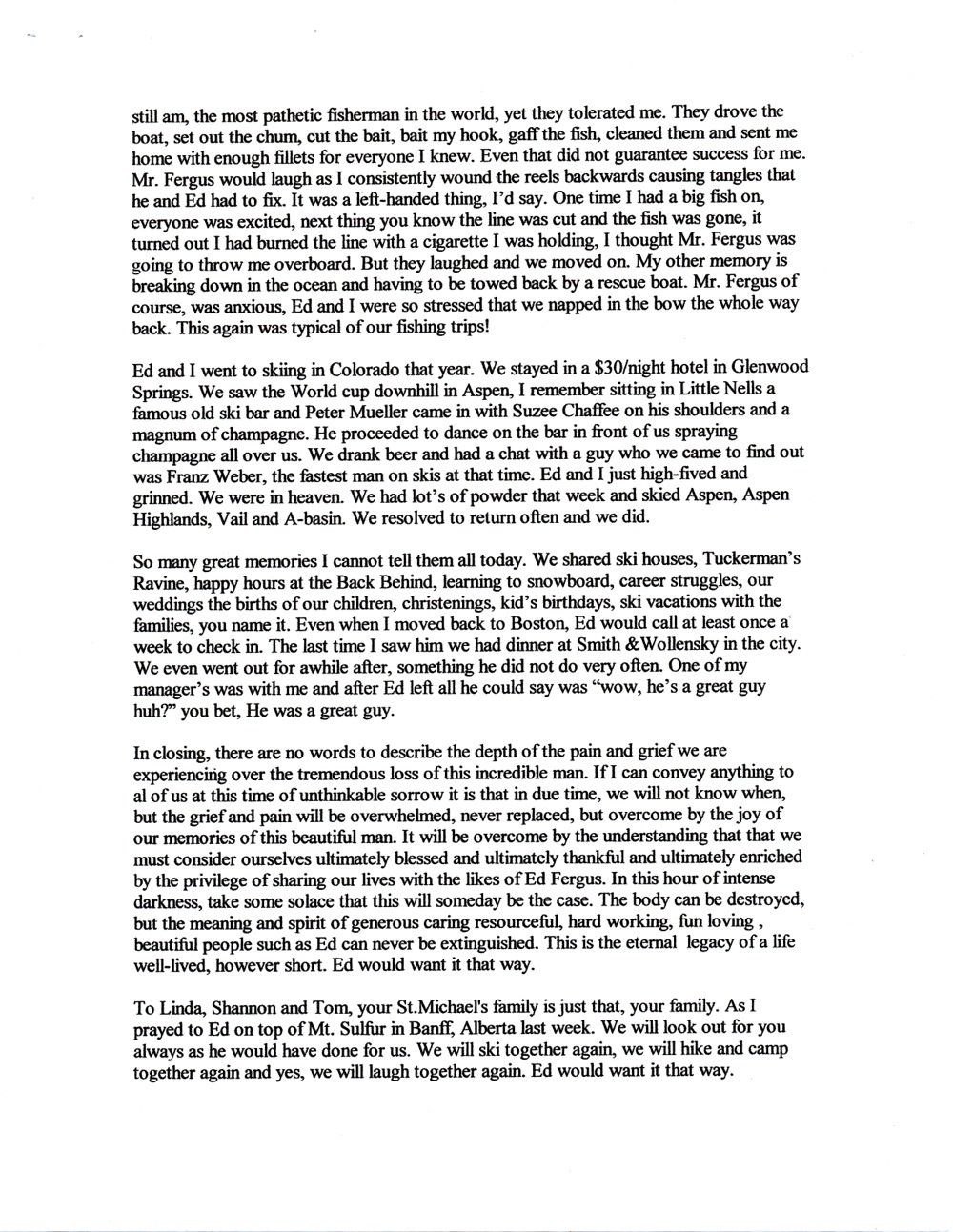 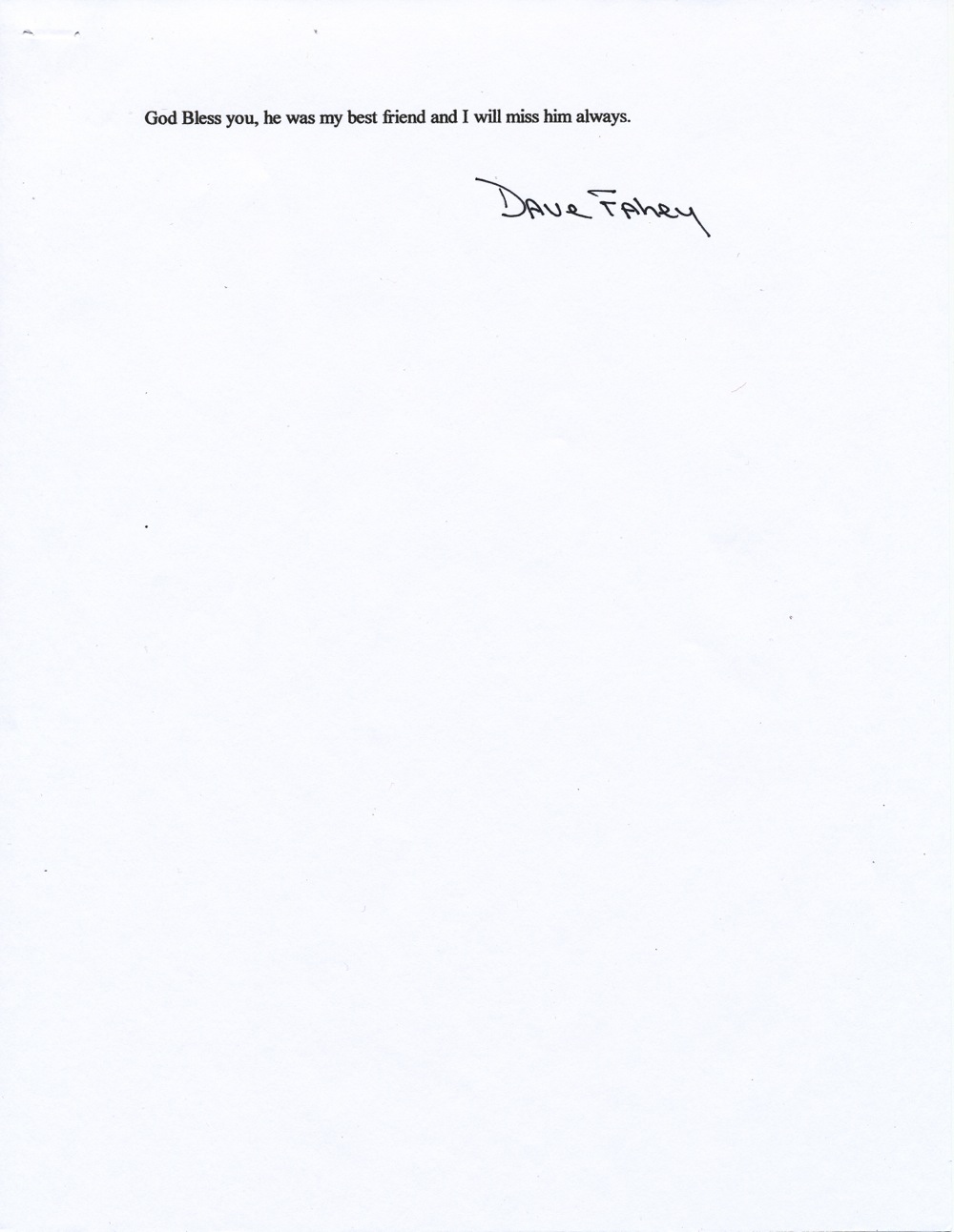 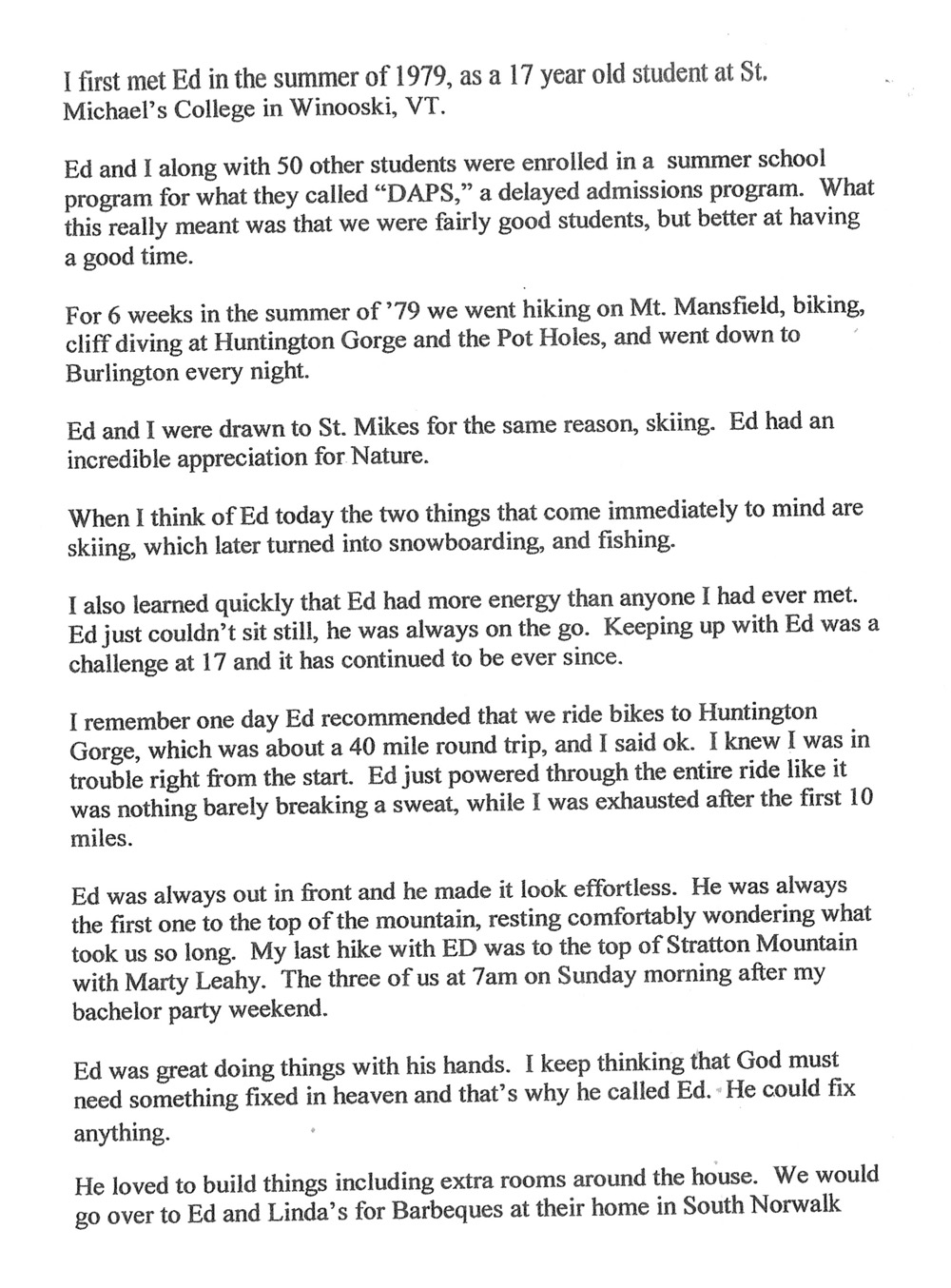 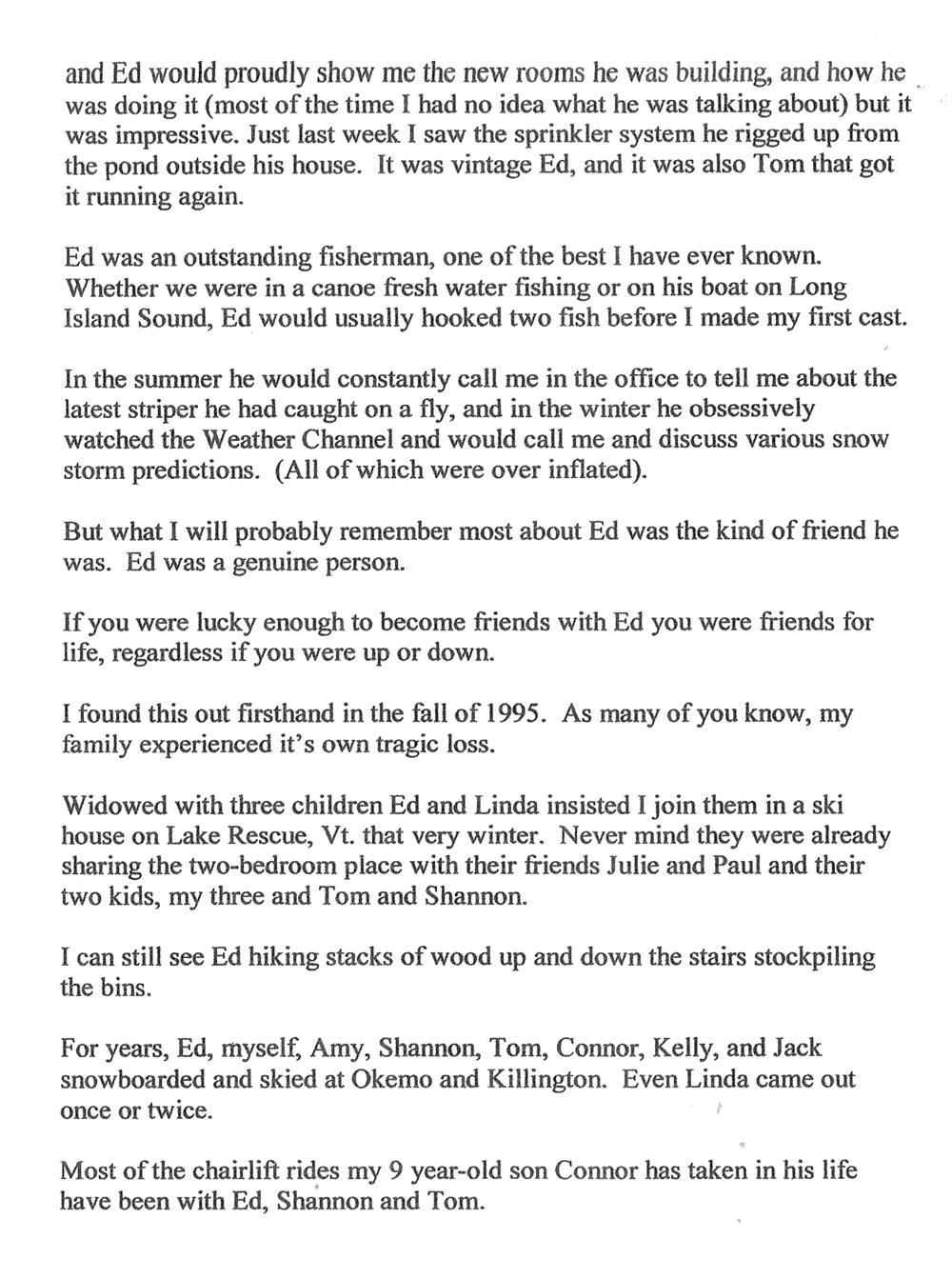 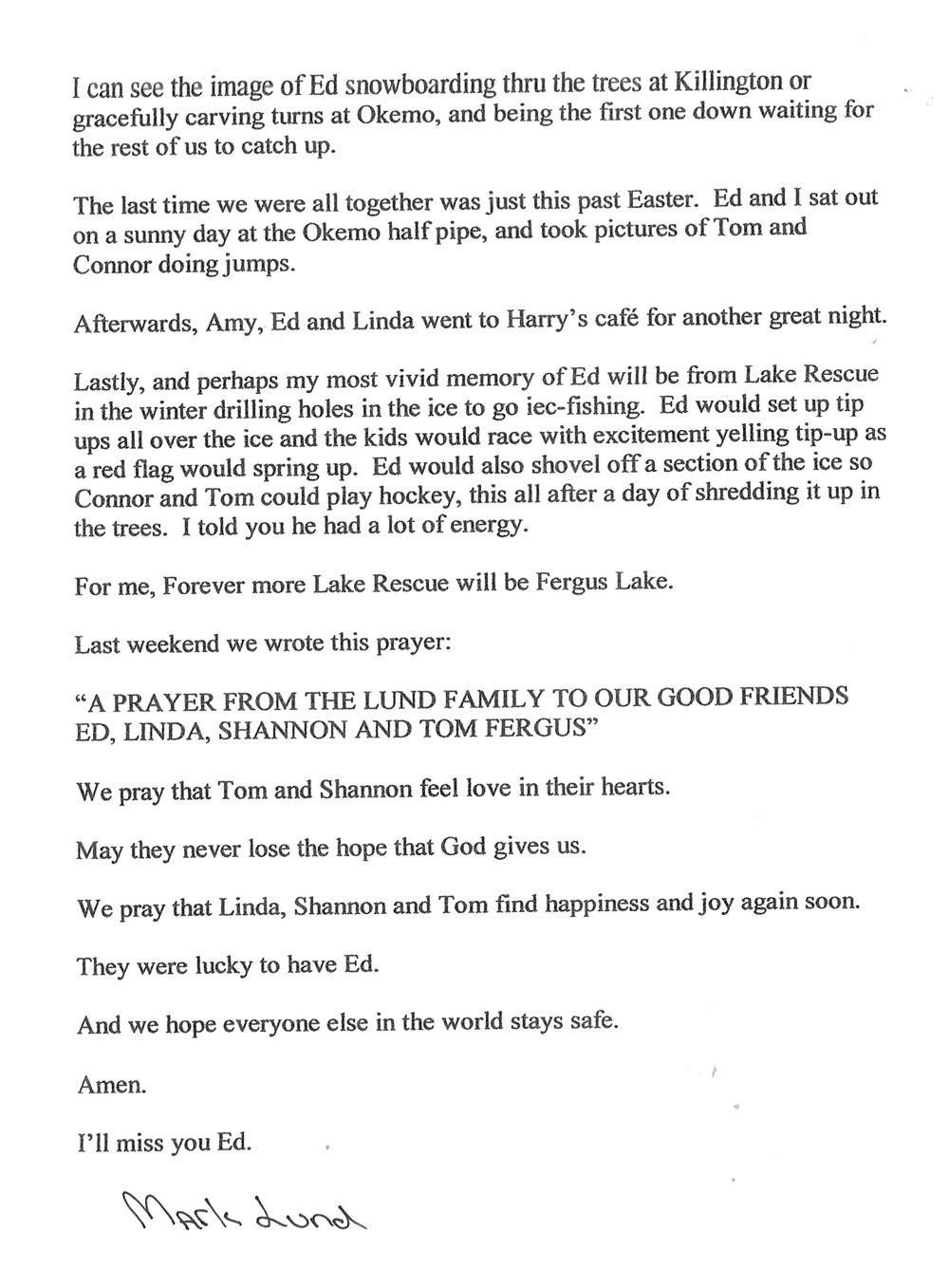 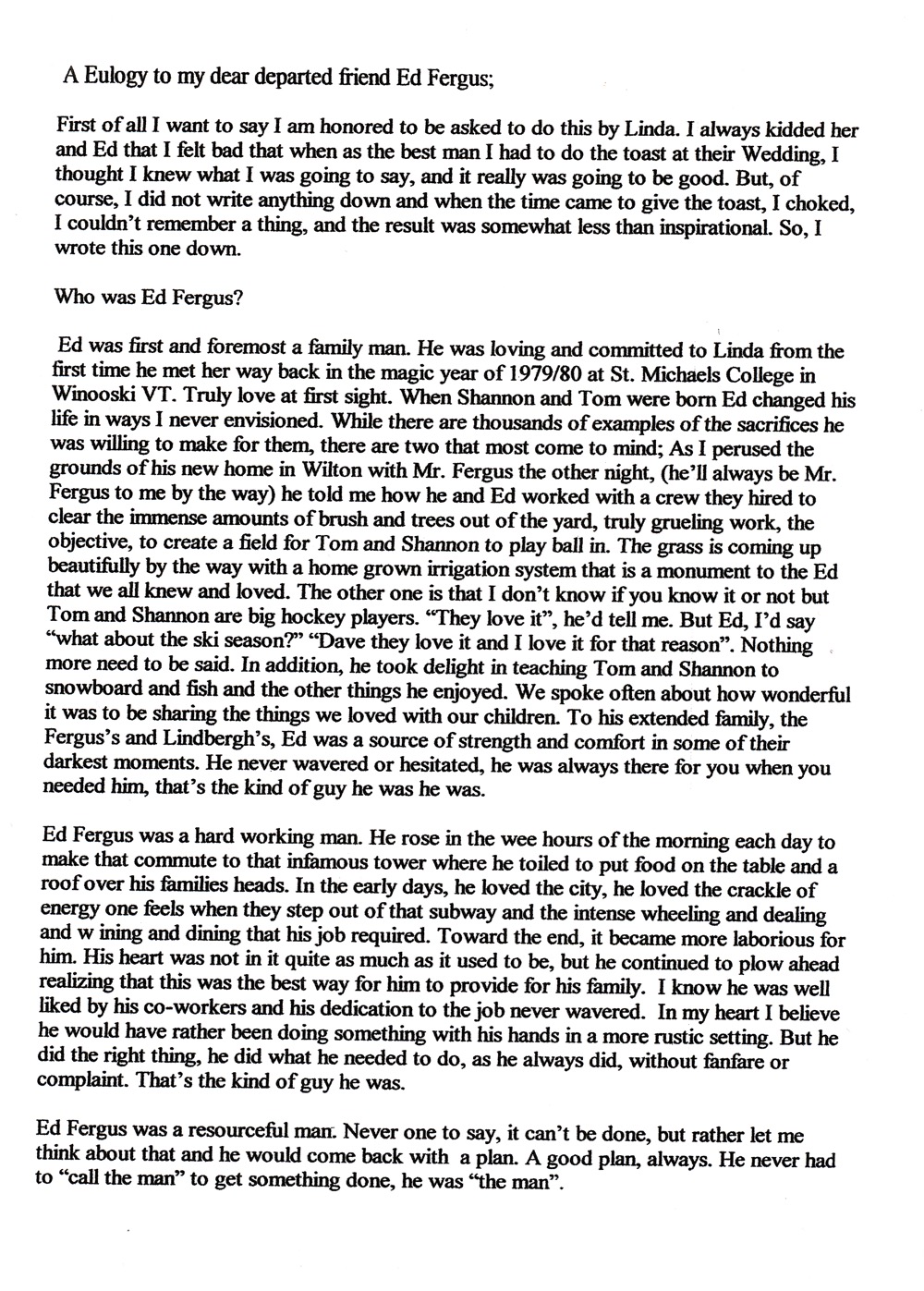 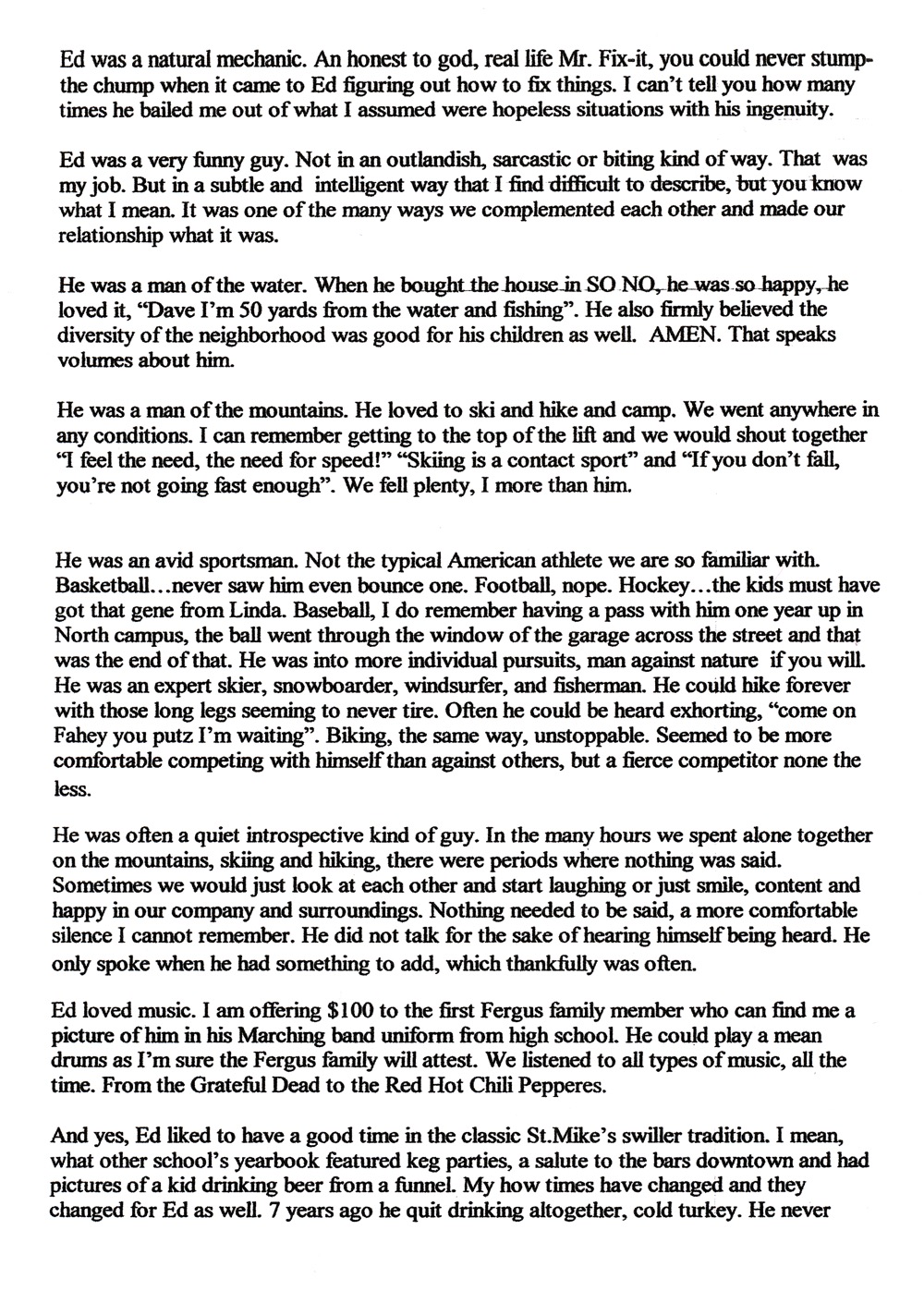 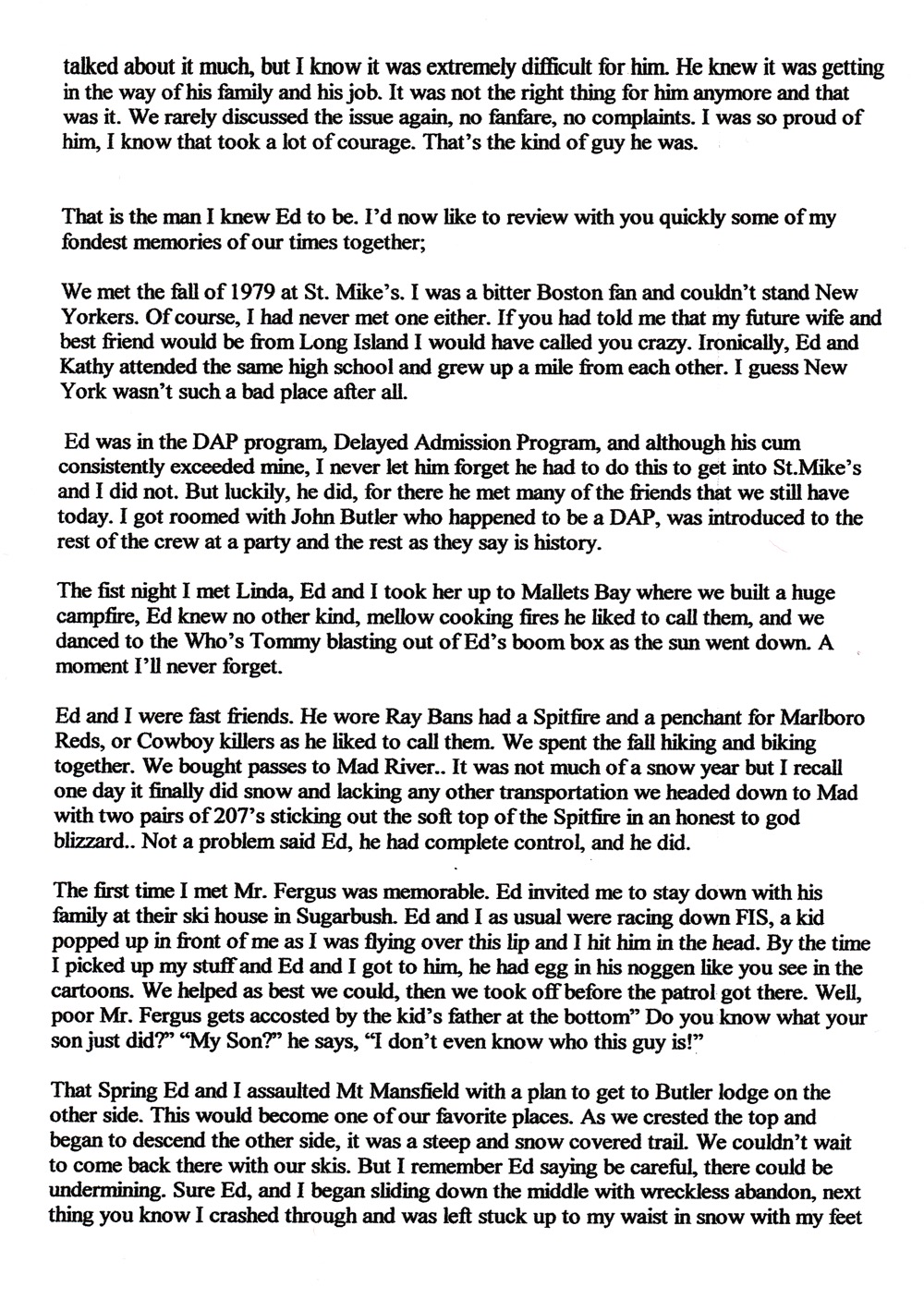 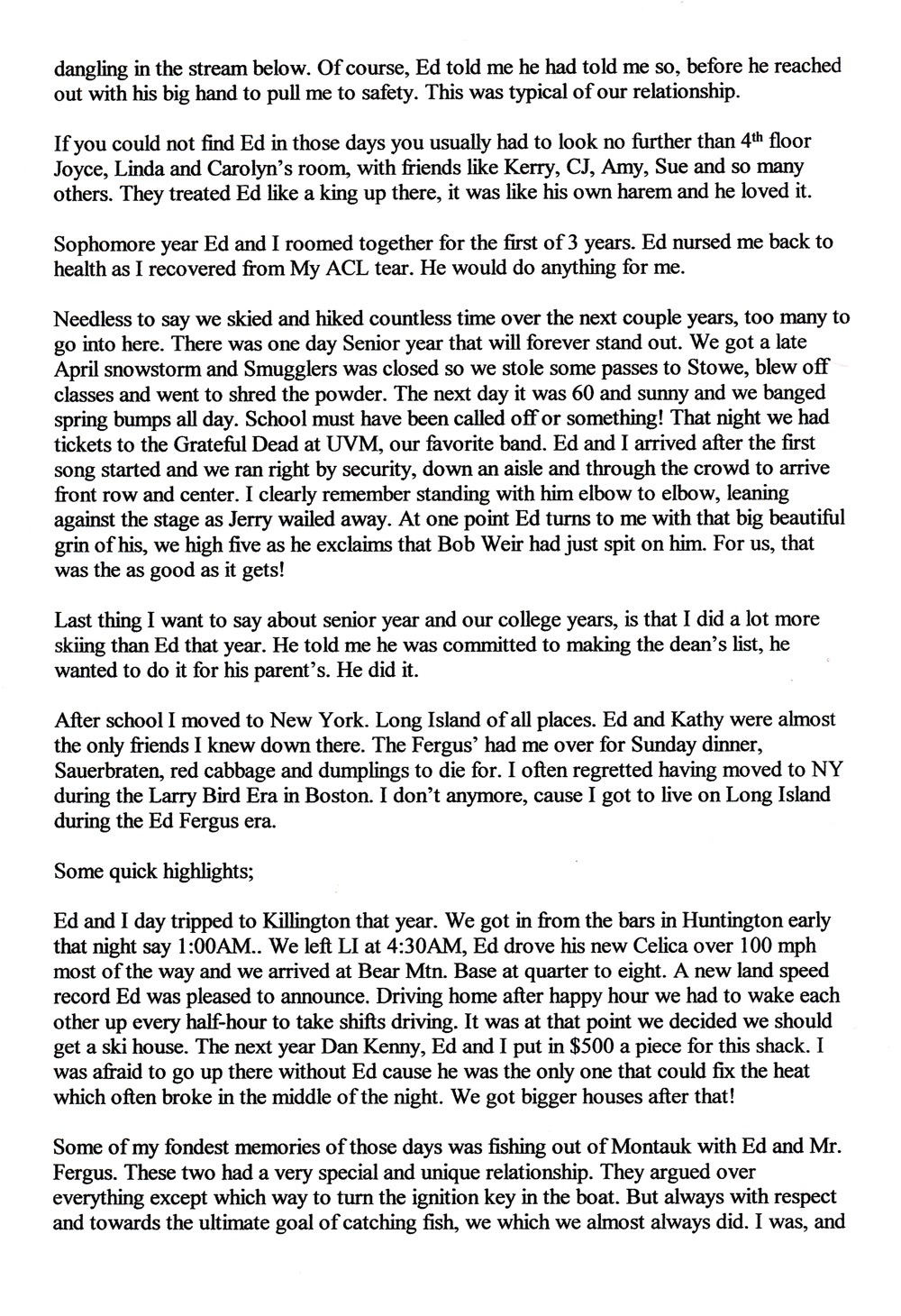 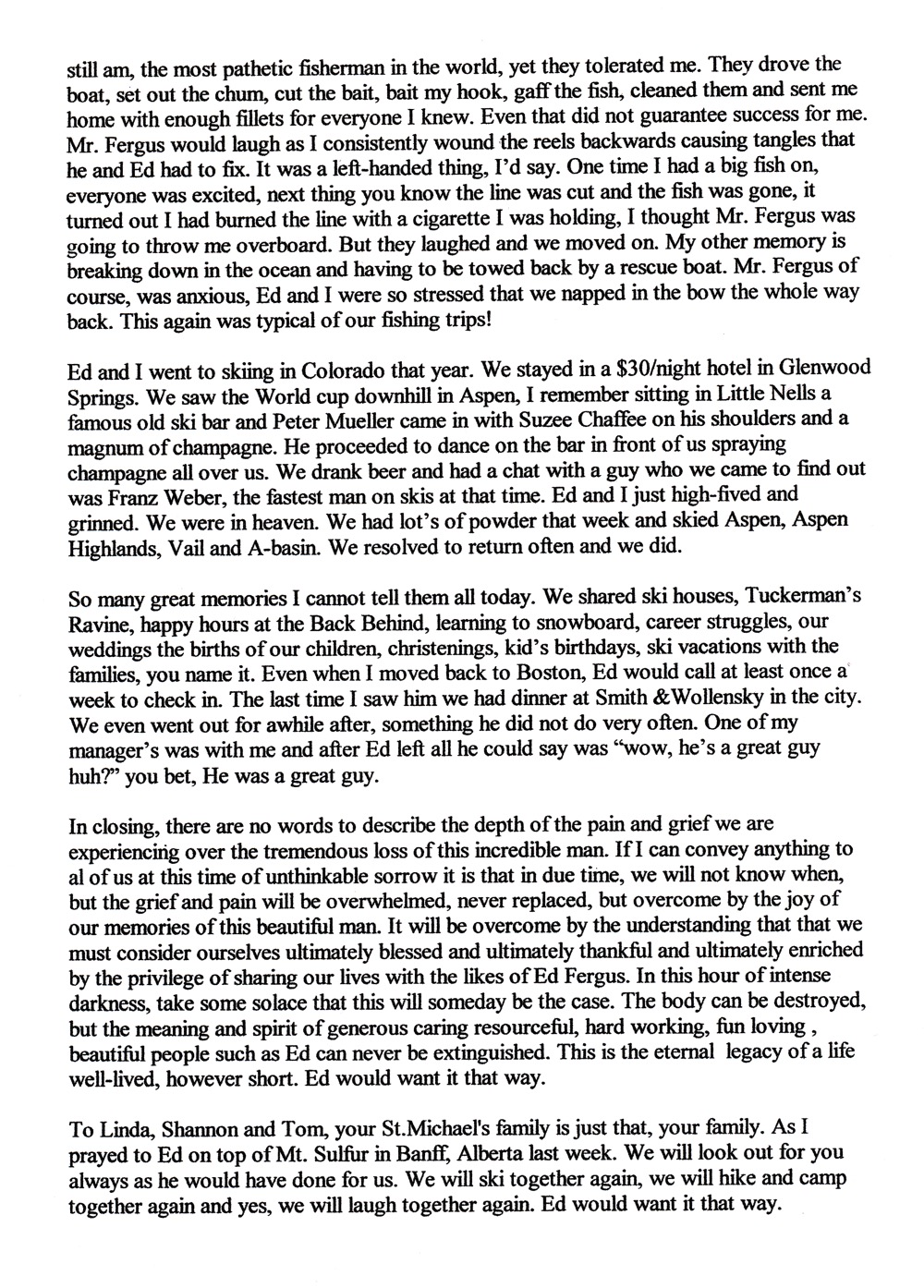 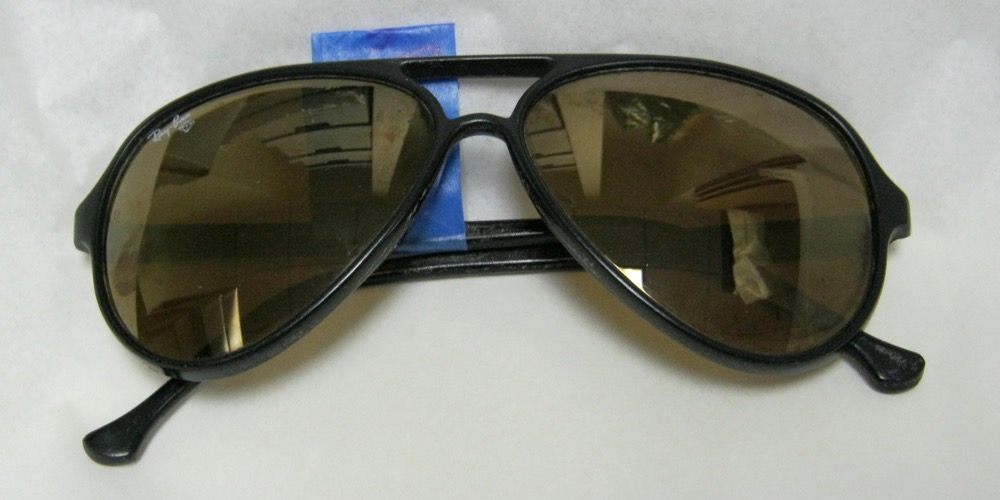 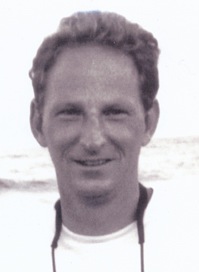 It only seems appropriate that the photo honoring Edward Fergus shows him by the water – he would spend Saturday mornings helping to fix his parents’ boat and then the afternoons on Long Island Sound, fishing with his two children, Tom and Shannon.

Edward worked at Cantor Fitzgerald, the firm who lost one third of their international work force when 658 of their employees perished, having worked on the 101st-105th floors of One World Trade Center, the floors above which the first plane made contact.

His energy on the floor translated well into his family social life, and he was known for rousing his siblings and their children to Connecticut for the annual Oyster Festival in South Norwalk, or to have picnics on their boat, or to go skiing in Vermont in the winter. He also dedicated himself to helping others through volunteer work, and attended church weekly.

He was survived by his wife, Linda, their children Tom and Shannon, who were 10 and 11 years old at the time of his passing, and a score of siblings, cousins, nieces and nephews, most of whom live in the tri-state area.

Every Saturday, the first thing Edward T. Fergus Jr. did was drive to Dix Hills, N.Y., to tinker with his parents' boat and do some chores. Returning home to Wilton, Conn., he would go fishing on Long Island Sound with his 10- year-old son, Tom, and 11-year-old daughter, Shannon. Then, before dinner, he would work on the nearby house he was renovating. The question was: how?

"On-tap energy," said Allison Fergus, his sister. Working at Cantor Fitzgerald, he was home early enough for picnics in the boat with his wife, Linda, and the children. The winter sports were skiing and snowboarding, usually in Vermont.

Mr. Fergus, 40, organized the annual seaside vacation with his parents and three sisters, and coaxed the two sisters who lived in Manhattan to get out of the city for events like the Norwalk Oysterfest. He was hard to miss, even in the church balcony. The priest always picked him out — a head above everybody, with red hair that nearly glowed.

Perished in the World Trade Center Attack. More information available at the group Memorial: World Trade Center Fergus Jr., Edward T. - Edward T. Fergus, Jr., a Wilton resident and a former 12 year resident of Norwalk, died Tuesday (September 11, 2001) in the World Trade Center terrorist attack. He lived in Wilton with his beloved wife, Linda Limburg; his daughter, Shannon Marie; and son, Thomas William. He is the son of Edward T. and Dorothy A. Fergus of Dix Hills, NY; brother of AnneMarie Rayhill of Darien, Maureen Fergus Sheehan and Allison Fergus, both of New York City; son-in-law of Henry and Marilyn Limburg of East Hartford. Ed, 40, graduated St. Michael's College in Winooski, VT. He was a Partner at Cantor Fitzgerald Investments. Ed is remembered as a devoted husband, father, son, brother, uncle, and loyal friend to many. Ed was known for devotion to his causes and volunteering his time for the concern and help of others. He enjoyed the outdoors, was a master fisherman and avid skier. A memorial service commemorating Ed's life will be held on Friday, September 21, 12 Noon at St. John R.C. Church, 1986 Post Road, Darien. In lieu of flowers, please send donations to either of the following: The National Marfan Foundation, 382 Main Street, Port Washington, NY 11050 or the National Alzheimer's Association Research Fund, 919 North Michigan Avenue, Suite 110, Chicago, IL 60611. Memorial Provided by: American Memorials