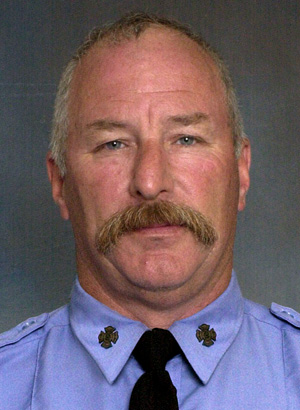 He was my best friend, and he was lots of people’s best friend. He just kind of had that way about him. He touched a lot of people’s lives, and he’s going to be missed by many, many people,” said John Elges, son of John R. Elges, a retired FDNY firefighter and Long Beach volunteer fire captain, who died on Sept. 15. He was 60.

Elges, who had moved to Littleton, N.C., in his retirement, developed cancer after helping sort through the wreckage at the World Trade Center after the Sept. 11 attacks. He was known by his colleagues and loved ones as a family man who prioritized his children and his firefighting duties.

“Family was always first,” said John Griffin, Elges’s lifelong friend and a Rockville Centre firefighter. “But he was always a fireman through and through, even when he retired.”

Accompanied by the sound of bagpipes, hundreds of people, including FDNY and local firefighters, lined West Penn Street and gathered at St. Ignatius Martyr Church last Saturday to honor Elges at his funeral.

He was diagnosed with throat cancer in 2015 as a result of exposure to toxins when he sifted through the rubble at ground zero. The disease later spread to his lungs and brain.

“He was the type of guy who never complained,” Griffin said. “I know from talking to his doctors. He’d say, ‘OK, what are we going to do about it? Let’s go, come up with a plan, and let’s get it done.’”

Elges grew up in Far Rockaway and attended Beach Channel High School before working as a carpenter and joining the New York City Fire Department in 1985, Griffin said. He joined the Long Beach department in 1989, and served as a ladder truck captain in the West End.

A day after the 9/11 attacks, he and 12 fellow firefighters from Ladder Company 134 in Far Rockaway rushed to ground zero. He worked on the pile for 10 days, his son John said.

“If he could turn the hand of time back, he wouldn’t change a thing — he’d still be down there,” Griffin said.

Shortly after he retired in 2009, Elges moved to North Carolina with his wife, Nuala. He was a highly decorated firefighter, having received nearly a dozen awards, including three bravery citations.

“He wasn’t the type of guy to say, ‘Hey, I did this.’ It just wasn’t in his nature. He was the type of guy who went to work, and did his job well. I remember there being a fire here [in Long Beach], and he found a woman on the third floor of the fire building and pulled her out,” Griffin said, recalling an incident from 1997. “She succumbed to her injuries, but it was a great job done by him. He’s a fireman’s fireman.”

“He was a great guy in all forms,” his son said. “He was very kind and very loving — it’s a real tough loss. His kids and his grandkids were his life. He once said for every grandchild born is another part of his heartbeat.”

His fondest memories, John said, were of camping with his father in the Adirondacks.

“His father did that with him, and he did that with me during my childhood,” he said. “Having him show me all the stuff his father showed him . . . It’s a shame it gets cut short, but I got that to pass on to my son.”

Family and friends said Elges strived to pass down his knowledge and wisdom to younger generations. He shared his life lessons and offered sound advice.

“He was a valuable member who was always looking out and training the younger members,” Fire Commissioner Scott Kemins said. “He had a lot of knowledge that he was looking to give to our younger members, and he was somebody who loved to give back to his community by volunteering.”

Elges never hesitated to take someone under his wing and teach them.

“He really [looked] after the young guys, trained them, and made sure you knew what was going on so you’d be safe,” Griffin said.

At the funeral, Michael Orminston, a probationary firefighter under Elges, recalled working with him for 10 years.

“He took me under his wing and taught me everything about being a firefighter, but he taught me about so much more,” Orminston said. “He taught me about life, family, and being responsible for your actions and owning up to your mistakes.”

He said that with Elges, everything was a lesson. He remembered the last time he saw him, when Elges recently came to the firehouse for lunch.

“For me, it was like old times. There I was, following him around, hanging on his every word. He was giving advice, as always, to the junior guys. We said our goodbyes, but little did I know that would be our last goodbye,” Orminston said through tears. “Thank you for being a part of my life. Thank you for the hours playing cards, the late night coffee sessions, to marching on St. Patrick’s Day. Thank you for listening, thank you for making me family, and thank you for being a friend. I can hear him talking to me right now, ‘You’re fussing over me too much, knucklehead.’ I love you, my brother, and I will miss you all the days of my life.”

NEW YORK (WABC) -- A retired FDNY firefighter has died from cancer linked to his time at Ground Zero. John Elges was cited three times for bravery during his 24 years as a New York City firefighter before he retired in 2009. A wake will be held Thursday and Friday, followed by a funeral Saturday at St. Ignatius Martyr Church in Long Beac