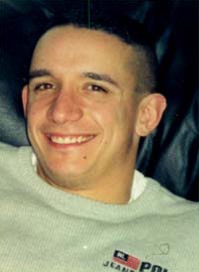 28-year-old Hoboken resident and his Fiancé, Monica had decided they would marry on Sept 1st, 2002.Three months prior to Sept 11th, 2001,Mr. Ianelli, an accountant formerly with an architectural recruiting company where he met Monica, went to work for a financial services conglomerate, Marsh & McLennan, on the 98th Floor of 1 World Trade Center.September 11th was the first day in his short time with Marsh that he went in early to prepare for a 9am meeting. Joseph A. Ianelli, born on July 6th, 1973, was raised in Staten Island, NY and attended The Monsignor Farrell High School and graduated with an accounting degree from CSI in 1995. At 6 feet 2 inches and about 190lbs, Joe was an avid sports enthusiast, playing as well as watching baseball and basketball and received College scholarships to play.

Joe never got caught up in the materialistic side to life. His family, friends and fiancé were the most important things to him and whenever anyone needed something, Joe was the first person to lend a hand. He would have given the shirt off his back to help the people he loved. No amount of help was ever too much. At his funeral, the message that his friends and family expressed was clear; Joe had this ability to touch people’s lives like no one else. He never had a problem showing affection and love and was open to receiving the same amount in return. He was an easygoing, warm and gentle soul and taught us all that the little things in life are the most important.

Out of a tremendous need to honor and remember him, Joe’s love, Monica, his family and friends have created, The Joseph A. Ianelli Memorial Fund; which will provide financial services to needy students each year at The Monsignor Farrell High School, as a well as other charitable organizations that need help. Joe leave’s his parents, Joseph & Barbara Ianelli of Staten Island, Fiancé Monica of Hoboken, sister Jennifer Thompson and brother-in-law Michael, his beautiful nephew Corey, grandmother Theresa Capozzi, his Uncle Michael and Aunt Margie; as well as cousins, Debi & John Guiffre and kids, Denise & Richie Willis and kids, Michael & Corinna Ianelli and kids and a great number of incredible friends.