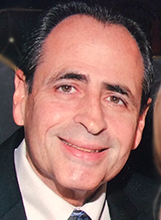 He made 181 arrests over the course of his time with the Department and was recognized seven times for Excellent Police Duty and twice for Meritorious Police Duty. Det. Glazer passed away on May 26, 2016 as a result of his work on the rescue and recovery from 9/11.

Born in Brooklyn, Michael attended James Madison High School. He worked at U.S. Life Insurance Company in Manhattan for 10 years as a maintenance worker before joining New York's Finest at the NYPD.

Michael's hard work often earned him the honor of Policeman of the Month, and it wasn't long before he was promoted to detective, where he continued his dedication to his work in specialty units, including OCCB, street crime, auto crime and narcotics.

He served the community for 28 years before retiring in 2011, just prior to his cancer diagnosis, which was attributed to his brave, heroic and selfless actions as a 9/11 first responder.

Michael will be remembered for his quick humor, welcoming smile, friendly disposition, and awesome BBQ skills-- just a few of his many wonderful attributes. Michael's unconditional love and deep loyalty to his family and friends were admired by all who knew him.

Michael was the most devoted, loving husband, the best father, stepfather, brother, friend and pop-pop to his family.