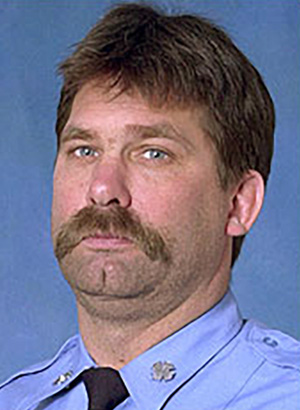 Survivor of September 11th terror attacks, Roy Chelsen was born in Brooklyn and raised in Staten Island. In his younger years, he was known for his determination, innate curiosity, quiet charisma, and athletic talent. His original life plan was to follow in the family footsteps and become an elevator constructor, which he did. Then, a group of his buddies decided to take the test for the Fire Department of New York. As always, Roy invited the challenge to compete with the boys. His amazing career as a proud FDNY firefighter commenced. In the firehouse, Roy was known for his leadership, quick wit, talent for cooking, but most of all, living the motto of the firehouse “Do the Right Thing.” He believed in teamwork and community, hence his involvement with his son’s soccer team, volunteering for “Sports for Health” during the summer, and helping any brother in need.

Roy and his wife, Trish, worked hard and played hard. Together, they enjoyed volunteering, home improvement projects, motorcycling, the outdoors, and travel. Whether it was at the firehouse, renovation of his home, or that of a friend, Roy enjoyed working. Roy also modified their home to welcome and care for his dad.

A true hero, Roy responded to the catastrophic call on 9/11 with his 28/11 Fire Company. His Engine 28 Company helped many civilians escape the impending collapse of the Twin Towers that fateful day. As a true leader and decisive man, Roy led many of his fellow firefighters out of the building. Working tirelessly throughout the months that followed, he was exposed to the many toxins and dust at Ground Zero that subsequently affected his health and life.

At Christmas time in 2005, Roy was diagnosed with a rare form of blood cancer called multiple myeloma. Despite grueling chemotherapy, a tandem stem cell transplant, and a forced retirement, Roy never gave up. Roy was a true Norwegian, dubbed “The Viking” by his fellow firefighters, strong in body and mind. His resilience allowed him to fight and win many battles along the way. Roy and his family worked diligently to find a match for Roy and others like Roy. With passion and determination, they organized and hosted numerous marrow drives through their non-profit foundation, “Be the Hero~For a Hero,” to increase awareness. Ultimately, he lost his war, but others will be saved.

At first, his firefighter colleagues were wary when Roy W. Chelsen, the physically imposing leader of Engine Company 28, told them to run for it. One of the twin towers was gone, and they were in the one still standing. Mr. Chelsen remembered saying, “Let’s just get these people, and let’s get out of here.’’

Persuasion gave way to command, and his colleagues in the lobby of 1 World Trade Center fell in behind him, running beside a brick wall outside toward a pedestrian bridge over West Street.

“We got out and we got under the bridge,’’ Mr. Chelsen told a commander in January 2002, during an interview for an oral history of Sept. 11, 2001. “A couple of bodies came down, flying down, just in front of our guys. We just got under the bridge and, like: ‘OK, it’s safe. It’s good.’ All of a sudden, we heard this huge explosion, and that’s when the tower started coming down. We all started running.’’

It is a story that was not well known while he was alive, mostly because he was not one to talk about it, said Stephen J. Cassidy, head of the Uniformed Firefighters Association.

“This is one of those classic, unbelievably tough New York City firefighters,’’ Cassidy said. “He did not say a lot, but when you needed him, he was there.’’

Cassidy added, “There are a lot of firefighters alive today because of him.’’

Now, in the days since Mr. Chelsen’s death on Sunday at age 51, at his home in Warwick, N.Y., his colleagues and others are retelling the stories of their lost friend, who spent his career in the firehouse on the Lower East Side. They remember a big, plainspoken firefighter with a cleft chin who rode a Harley-Davidson motorcycle and moved through burning buildings with athletic grace.

“He was a very, very strong man,’’ said Kevin Murray, 36, a firefighter who followed Mr. Chelsen to safety. “He looks like he is a Viking. It usually takes two guys to hold a hose line, but he could hold it himself. We called everything Roy did ‘Roy’s world,’ because he just had a way of getting things done.’’

It was ironic, Murray said, when Mr. Chelsen died in his living room on Sunday evening, at 5:45, and “the date was 1/9/11 — which is just like Roy to do something like that.’’ Firefighters, family, and friends were there when he drew his last breath, Murray said, bantering and “busting each other’s chops,’’ the way their pal would have wanted it.

“He took the firefighters and their fraternity, or brotherhood, to heart,’’ said Mr. Chelsen’s son, Christopher, 24. “To say he loved it is an understatement.’’

Mr. Chelsen, 51, first got sick about five years ago. He died after a five-year battle with multiple myeloma, a cancer that the New York Fire Department, his relatives, and others consider linked to his service on 9/11 and his work in the ensuing weeks searching the rubble for lost colleagues. When he retired in December 2006 (he joined the force in April 1985), he received a World Trade Center disability pension, officials said.