In Remembrance
Photos of Virginia 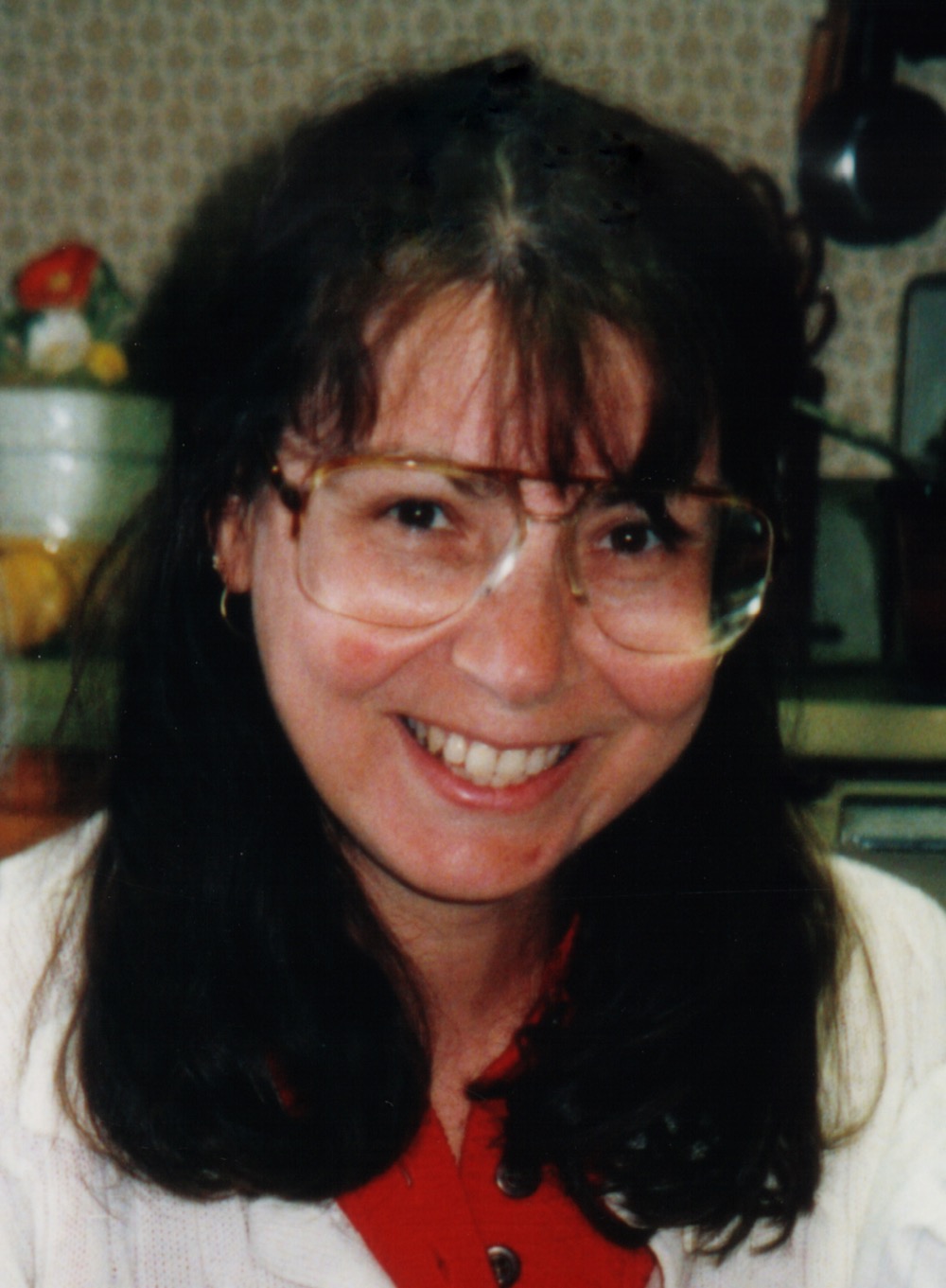 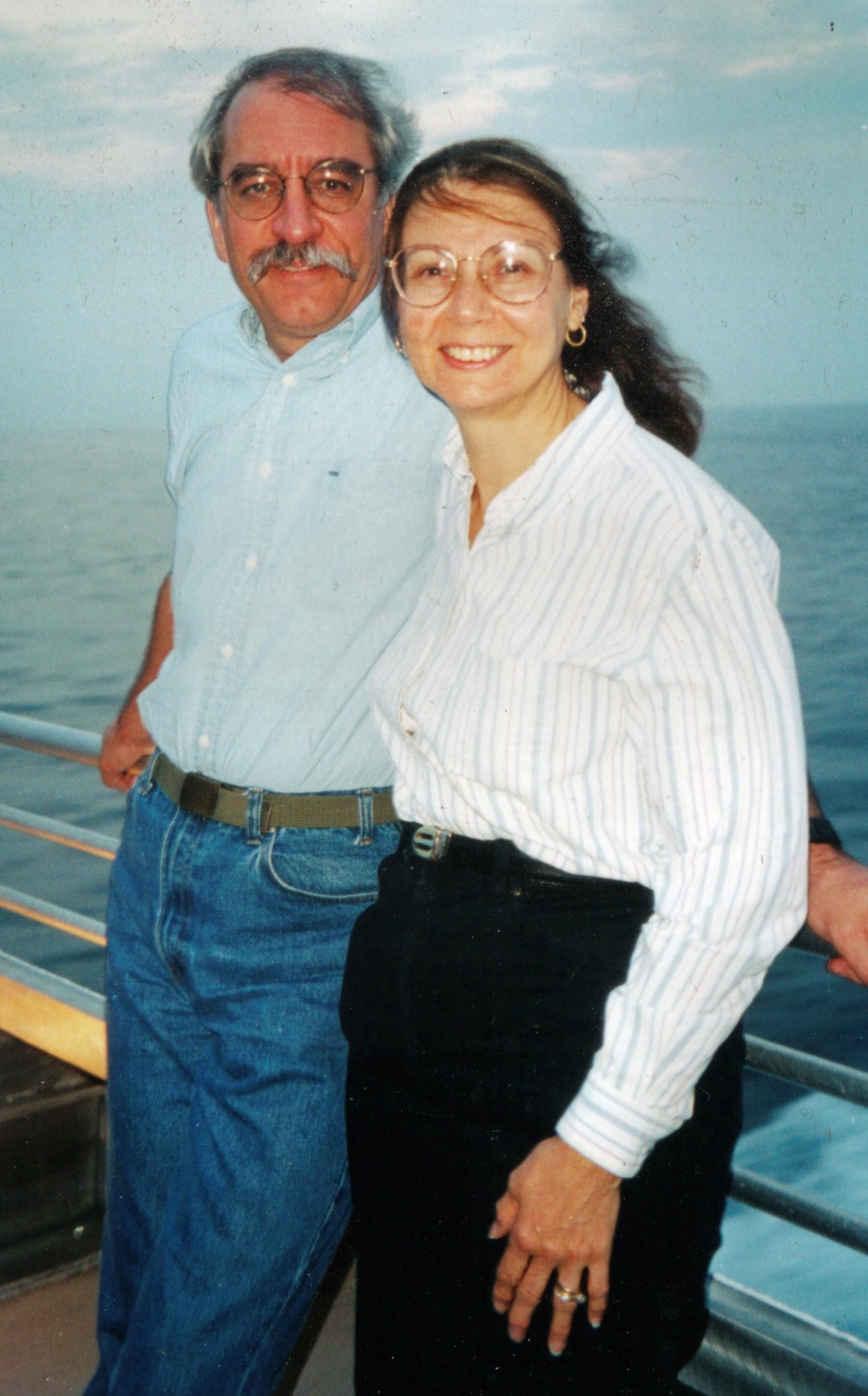 Virginia and her husband 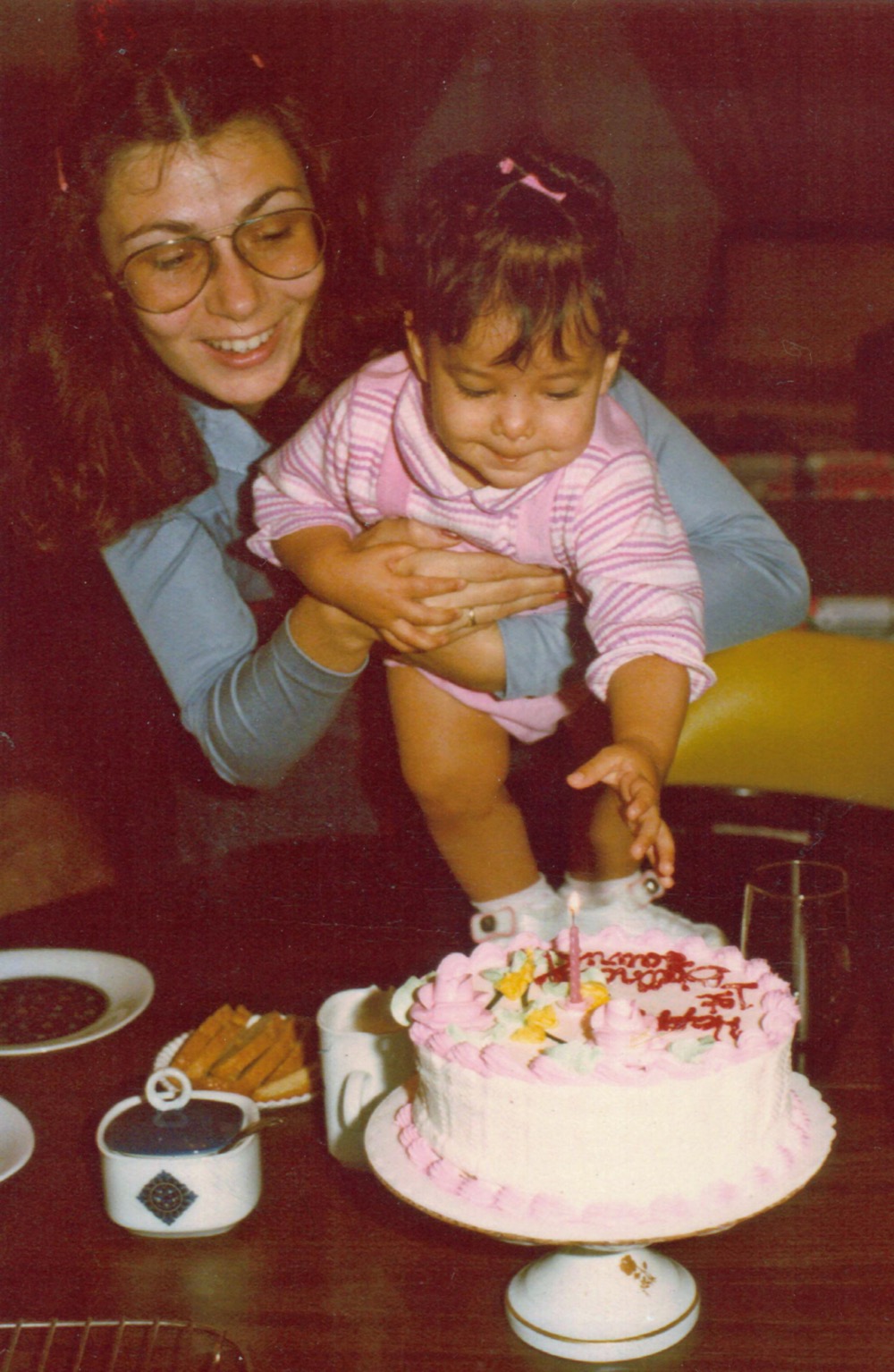 Virginia helping one of her nieces blow out some birthday candles 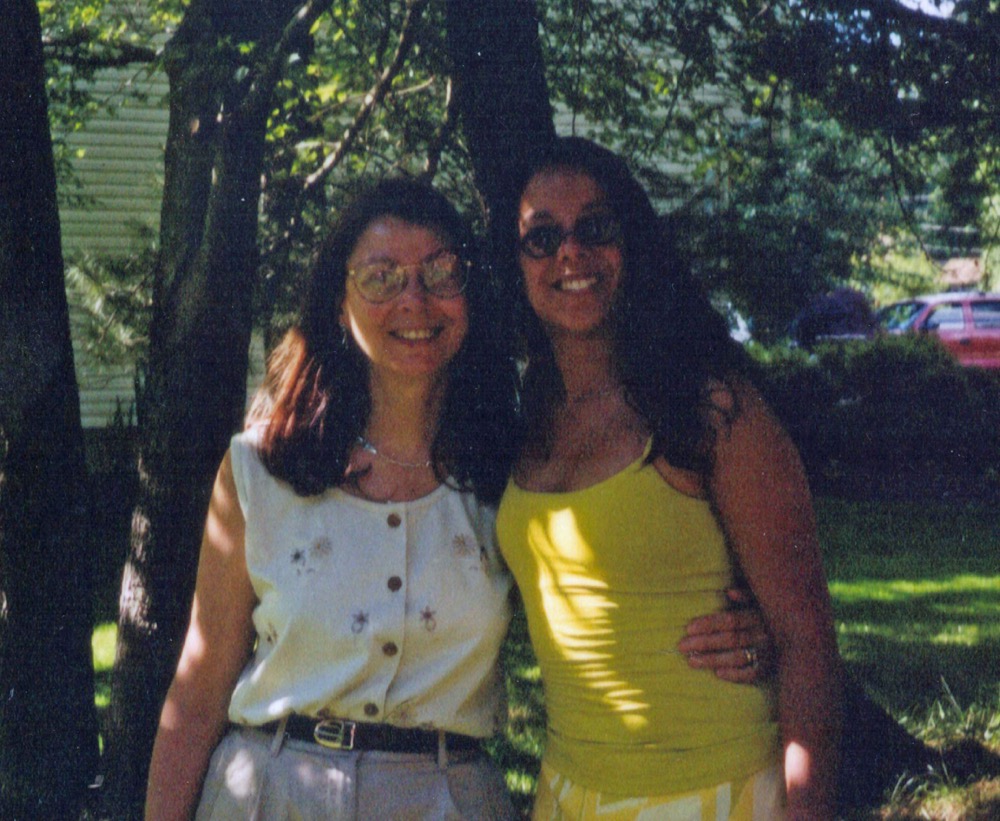 Virginia and a friend 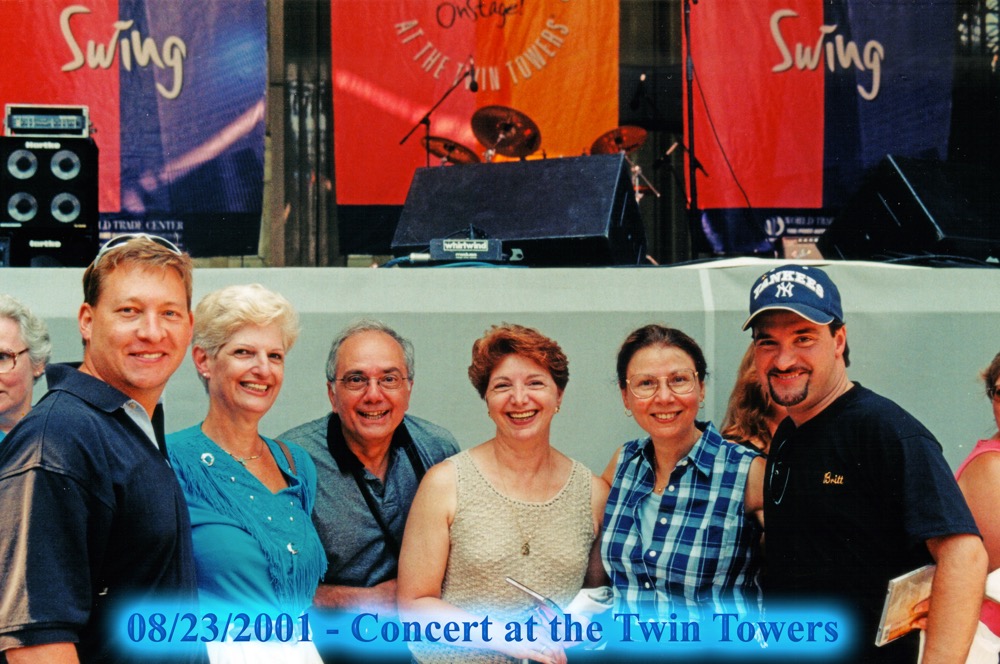 Virginia with family at a concert 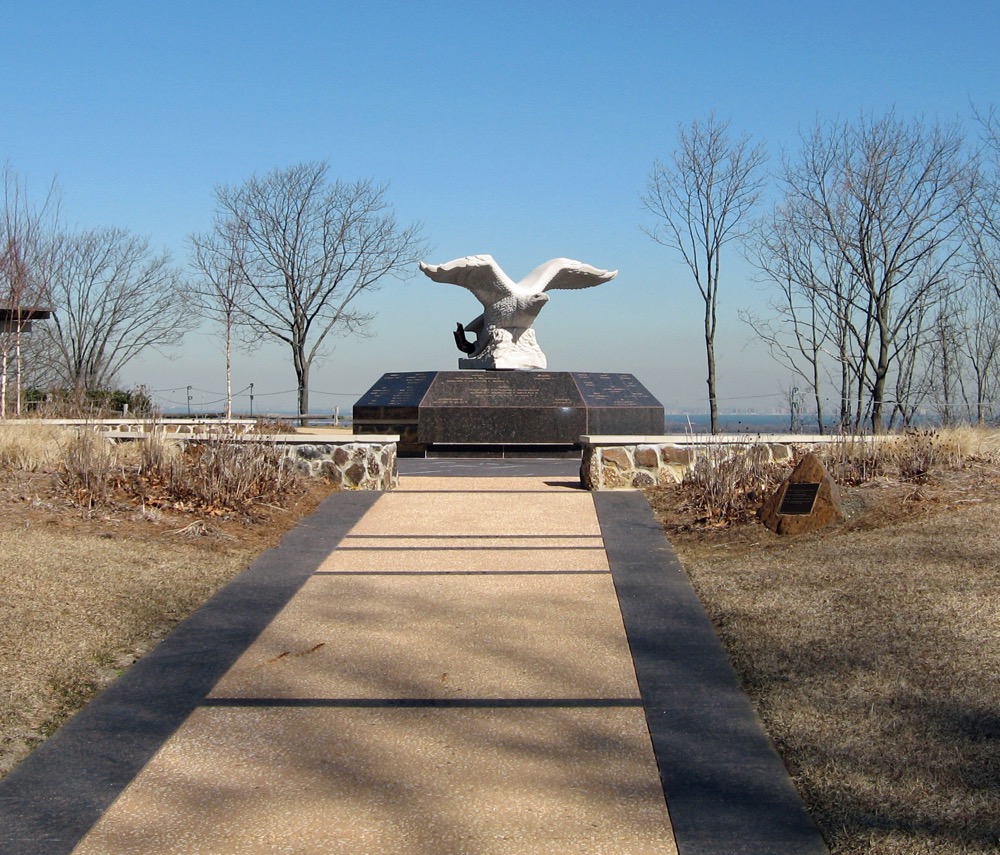 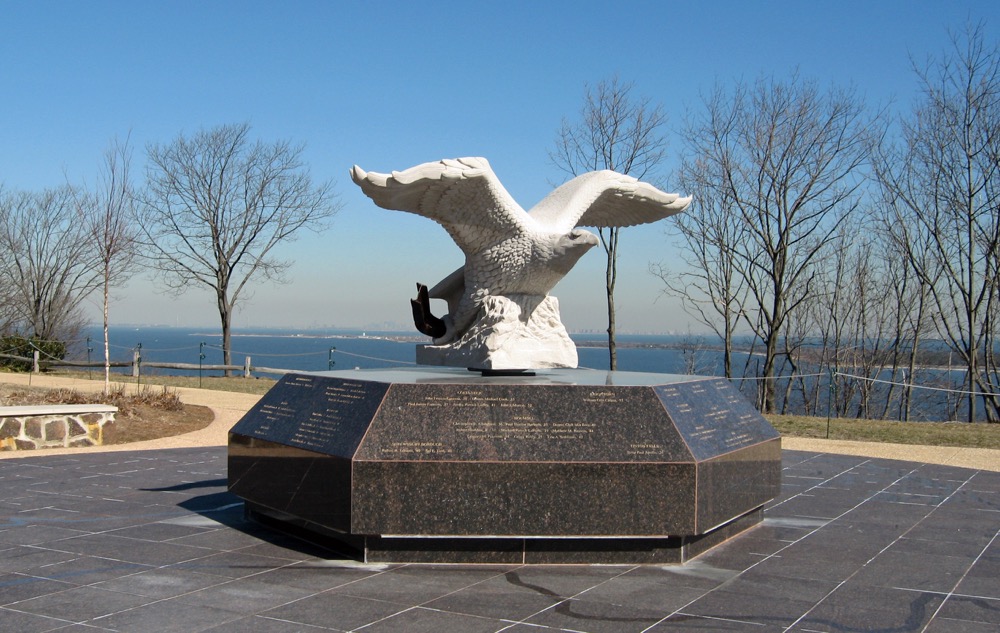 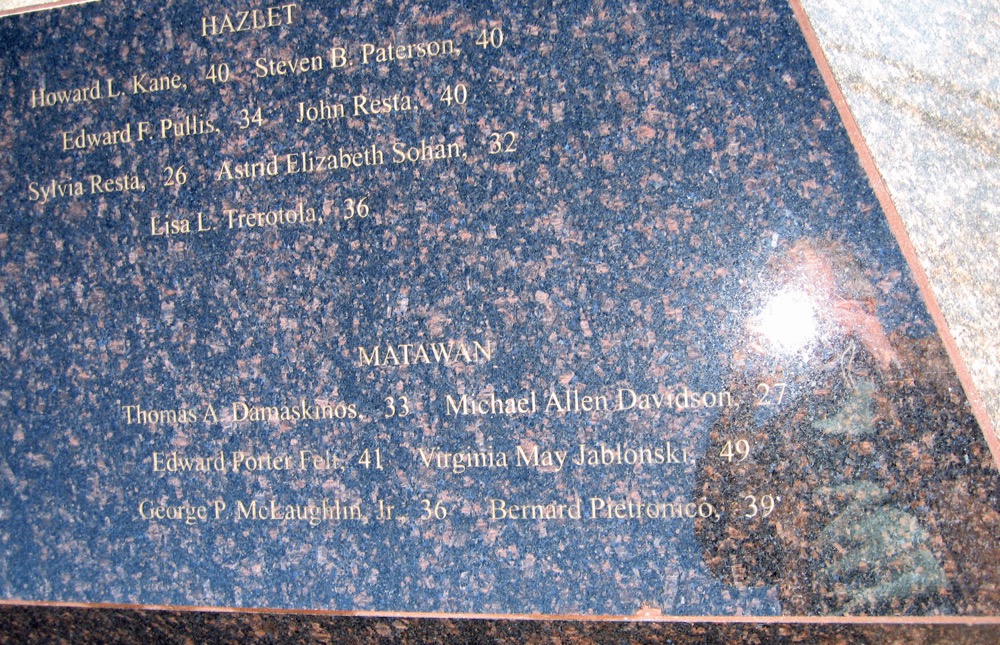 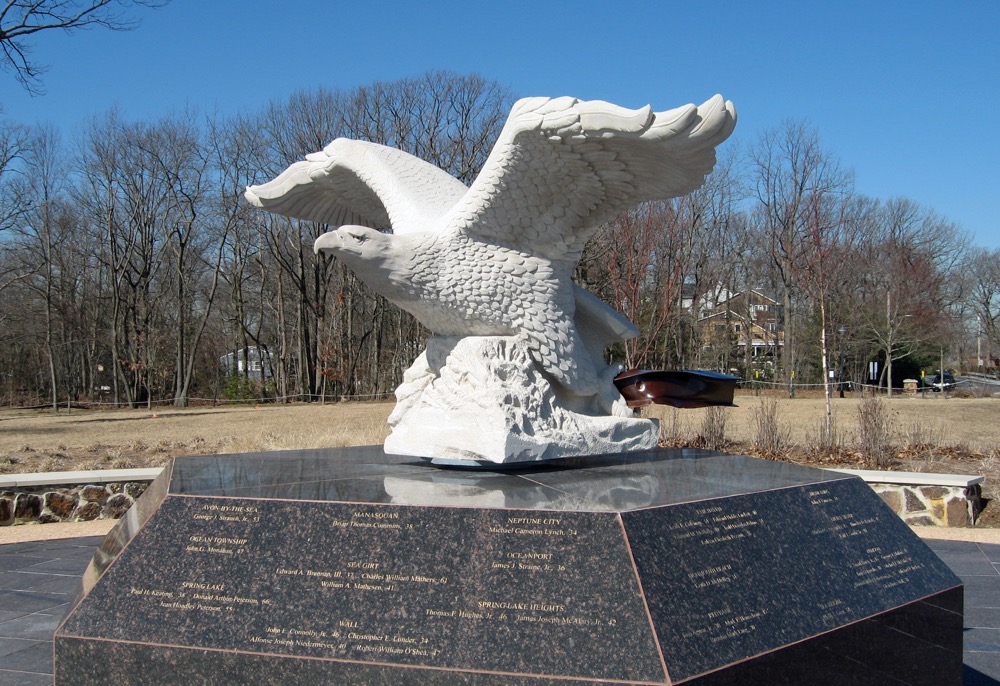 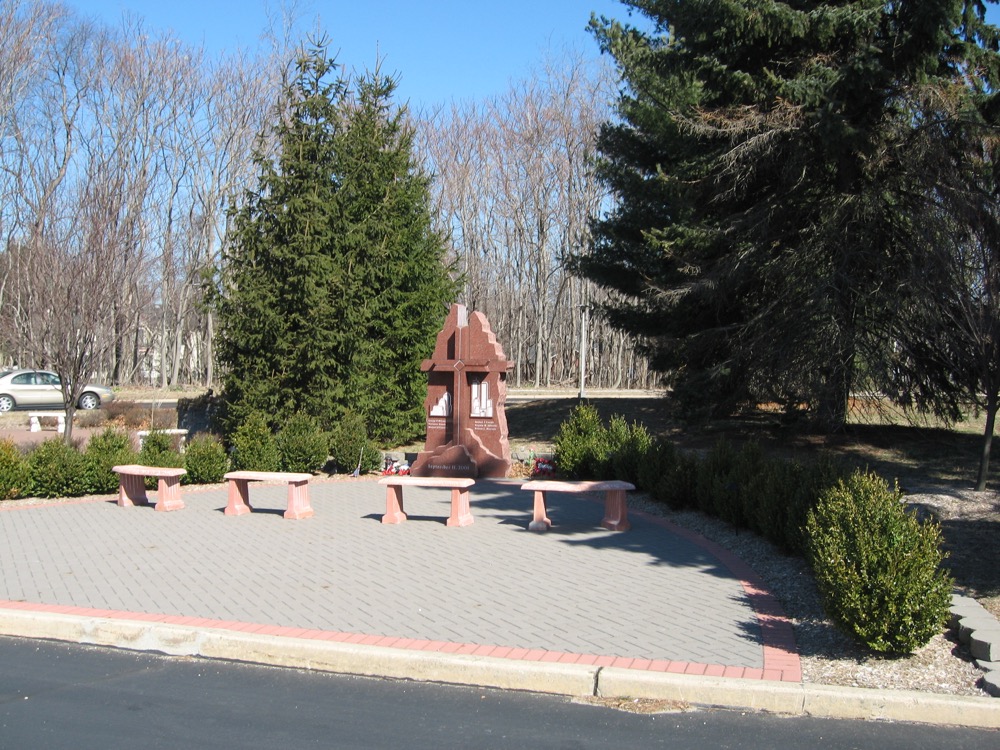 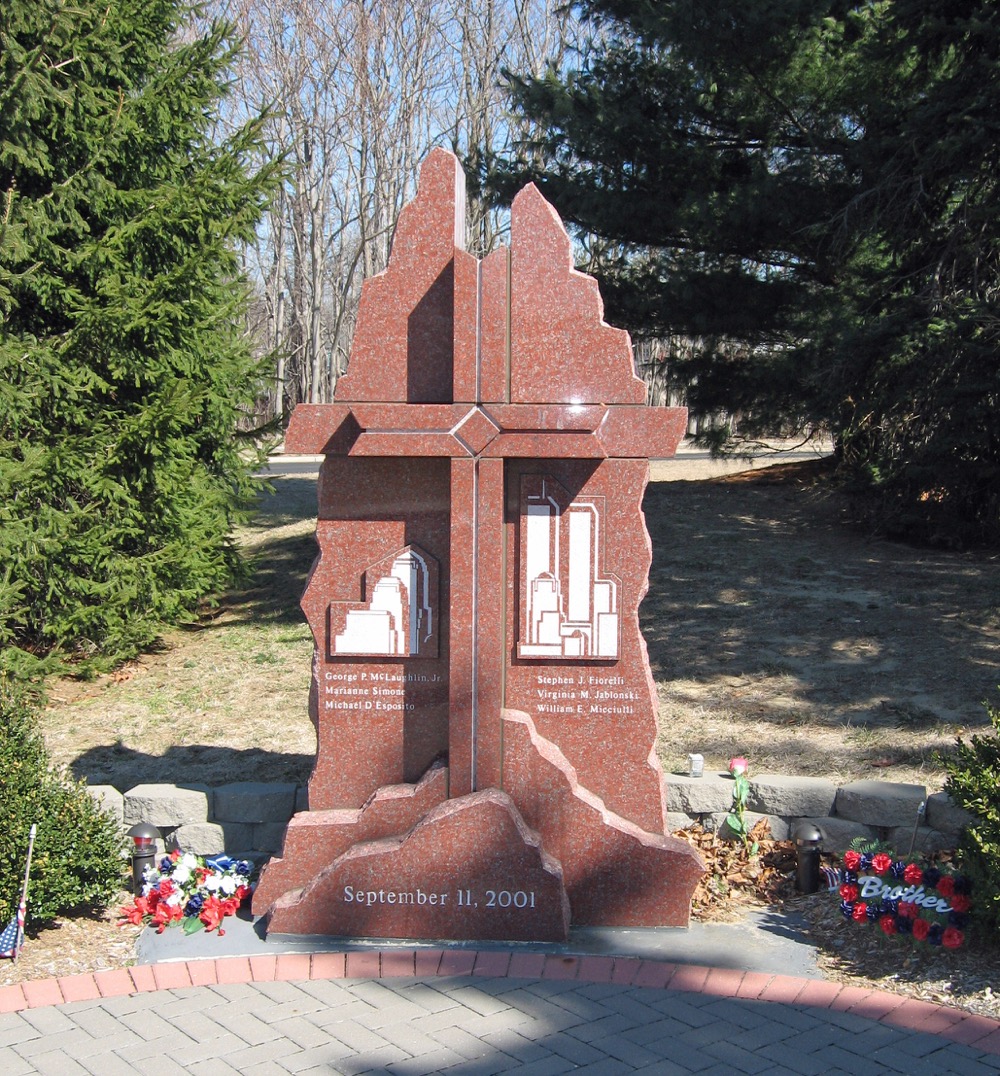 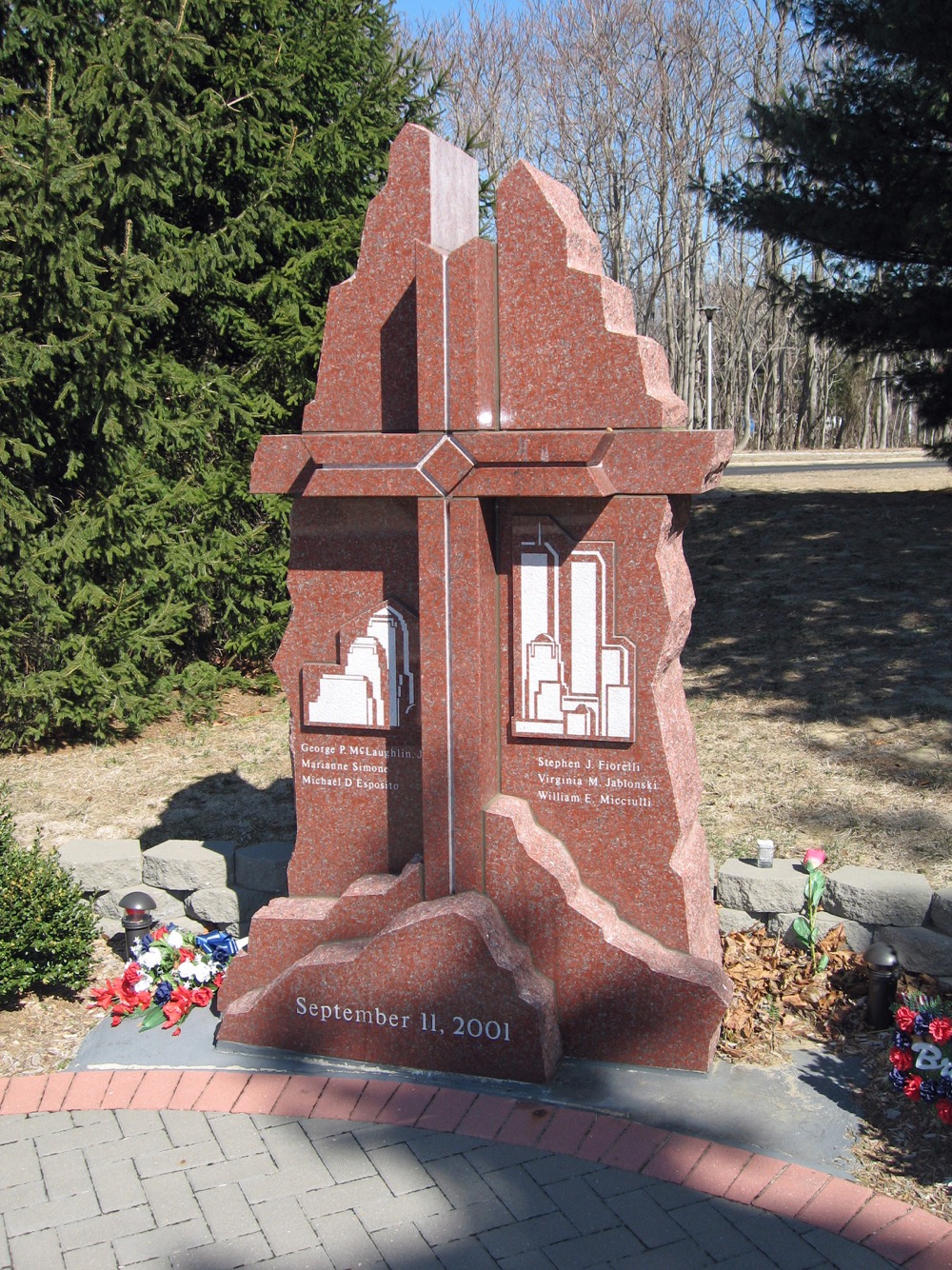 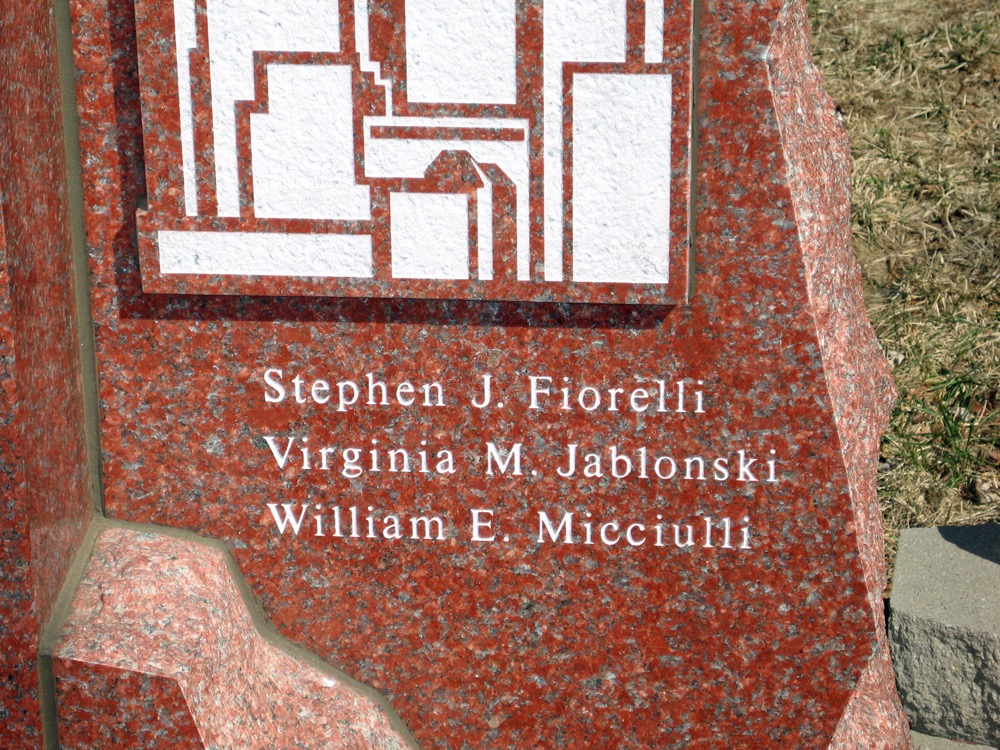 Remembrance piece about Virginia in the newspaper 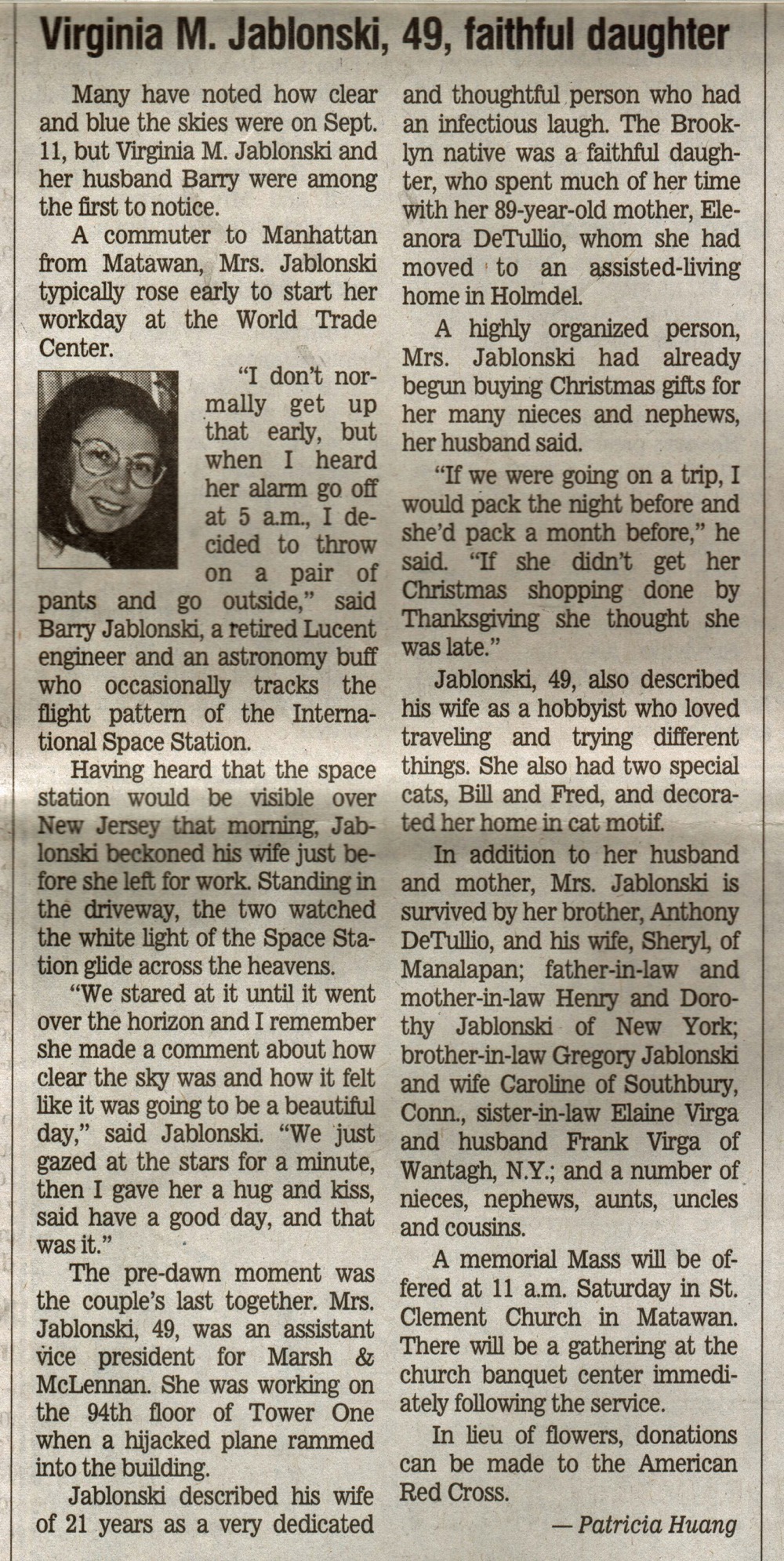 Virginia on her wedding day 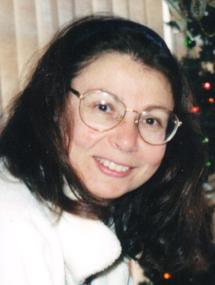 Many have noted how clear and blue the skies were on Sept. 11, but Virginia M. Jablonski and her husband Barry were among the first to notice.

A commuter to Manhattan from Matawan, Mrs. Jablonski typically rose early to start her workday at the World Trade Center.

"I don't normally get up that early, but when I heard her alarm go off at 5 a.m., I decided to throw on a pair of pants and go outside," said Barry Jablonski, a retired Lucent engineer and an astronomy buff who occasionally tracks the flight pattern of the International Space Station.

Having heard that the Space Station would be visible over New Jersey that morning, Jablonski beckoned his wife just before she left for work. Standing in the driveway, the two watched the white light of the Space Station glide across the heavens.

"We stared at it until it went over the horizon and I remember she made a comment about how clear the sky was and how it felt like it was going to be a beautiful day," said Jablonski. "We just gazed at the stars for a minute, then I gave her a hug and kiss, said have a good day, and that was it."

The pre-dawn moment was the couple's last together. Mrs. Jablonski, 49, was an assistant vice president for Marsh & McLennan. She was working on the 94th floor of Tower One when a hijacked plane rammed into the building.

Jablonski described his wife of 21 years as a very dedicated and thoughtful person who had an infectious laugh. The Brooklyn native was a faithful daughter, who spent much of her time with her 89-year-old mother, Eleanora DeTullio, whom she had moved to an assisted-living home in Holmdel.

A highly organized person, Mrs. Jablonski had already begun buying Christmas gifts for her many nieces and nephews, her husband said.

"If we were going on a trip, I would pack the night before and she'd pack a month before," he said. "If she didn't get her Christmas shopping done by Thanksgiving she thought she was late."

Jablonski, 49, also described his wife as a hobbyist who loved traveling and trying different things. She also had two special cats, Bill and Fred, and decorated her home in cat motif.

In addition to her husband and mother, Mrs. Jablonski is survived by her brother, Anthony DeTullio, and his wife, Sheryl, of Manalapan; father-in-law and mother-in-law Henry and Dorothy Jablonski of New York; brother-in-law Gregory Jablonski and wife Caroline of Southbury, Conn., sister-in-law Elaine Virga and husband Frank Virga of Wantagh, N.Y.; and a number of nieces, nephews, aunts, uncles and cousins.

A memorial Mass will be offered at 11 a.m. Saturday in St. Clement Church in Matawan. There will be a gathering at the church banquet center immediately following the service.

In lieu of flowers, donations can be made to the American Red Cross.

Profile by Patricia Huang published in THE STAR-LEDGER

Virginia M. Jablonski, an assistant vice president at Marsh & McLennan, liked to get up at 5 a.m. and catch an early bus from her home in Matawan, N.J., to her office on the 94th floor of 1 World Trade Center. In recent months, that often meant slipping out while Barry, her husband of 21 years, was enjoying the extra sleep made possible by his recent retirement from Lucent Technologies.

Fortunately, Mr. Jablonski is an astronomy buff. Having noted that the International Space Station was scheduled to pass directly overhead shortly before sunrise on Sept. 11, he got up with her that morning. He recalls their standing in their garden, marveling at the stars in the clear sky and sharing the feeling that it would be a good day.

"She was a bubbly person who was always smiling," Mr. Jablonski said. "Most people wouldn't know if she was angry."

No one could miss her passion for cats, though. Mrs. Jablonski, a 49-year-old Brooklyn native, filled their home with cat-themed decorations and doted on her two feline companions, Fred and Bill.