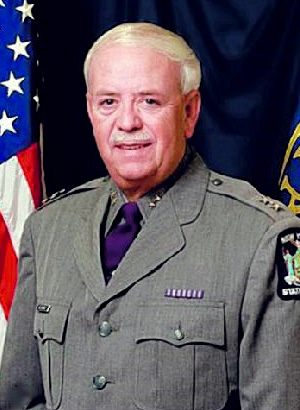 Superintendent Wayne E. Bennett was nominated by Governor Pataki on July 23, 2003 to become the 12th Superintendent of the New York State Police. He was confirmed by the State Senate on September 16, 2003. Superintendent Bennett has served the Division for 38 years.

The Superintendent, who has held all but three titles in the State Police Uniform Force and Bureau of Criminal Investigation, began his career with the Division as a Trooper in 1968. He rose steadily through the ranks to Investigator (1973), Sergeant (1974), Zone Sergeant (1978), Lieutenant (1982) and Captain (1985) and has served throughout New York State as well as in New York City with the DEA Joint Drug Task Force.

In 1987, he was promoted to Major and Troop Commander of State Police personnel in the ten-county area of Troop G, encompassing the Capital District and southern Adirondacks. This was followed in 1990 by his promotion to Staff Inspector in the Employee Relations Unit at Division Headquarters in Albany.

A native of Castleton, New York, Superintendent Bennett holds a Bachelors Degree in Business Administration from the State University of New York at Albany, and an Associates Degree in Banking, Insurance and Real Estate from Hudson Valley Community College in Troy.

Superintendent Bennett passed away on August 15, 2017. He was survived by his wife Patricia, his daughters and grandchildren.

Wayne Edward Bennett, 71, of Clifton Park, New York, left peacefully with his wife by his side on August 15, 2017. Born February 26, 1946 to Edward F. Bennett and Eleanor I. Bennett, Wayne was a happy child who expressed an early passion for adventure. He was an athlete and outdoorsman who cherished his time working at his maternal grandparent's farm.

As a young boy, Wayne dreamed of becoming a New York State Trooper. After graduating from Maple Hill High School, Hudson Valley Community College, and The State University of New York at Albany, Wayne applied to and was accepted as a recruit in the prestigious New York State Police Academy. Following his 1969 graduation with the 115th Basic School Session, Wayne began a career that spanned almost 40 years with the New York State Police. Holding all but three titles in the Uniform Force and Bureau of Criminal Investigation, Wayne prided himself on understanding the needs of his fellow Troopers.

In his career, he worked under six New York State Governors, performing detail service for Nelson Rockefeller. Wayne watched communication systems move from teletypes, to fax machines to email, to internet and web-based networks. He celebrated the admittance and graduation of the first female class at the State Police Academy, and watched as they began their careers as Troopers, paving the way for generations of women in law enforcement. He watched his peers work the 1980 Winter Olympics in Lake Placid and understood their joy as the Miracle on Ice sparked pride in US citizens. He survived the sobering experience of working Prison detail when the NY State Corrections Officers went on strike and troopers needed to guard those incarcerated. Wayne also worked Thruway detail and witnessed the Woodstock Festival overtake Bethel and its surrounding areas. He lived the life of an undercover investigator interrupting drug trafficking in New York City in the late 1970s.

As he rose in rank, Wayne learned how to work with the media and reporters to ensure the integrity of the State Police and the people served by its Troopers. Wayne witnessed the conception, birth and opening of the NY State Forensic Investigation Center. On September 11, 2001, in the aftermath of the 2001 terrorist attacks at the World Trade Center, Wayne responded to the World Trade Center site and coordinated and supervised all NY State Police rescue and recovery operations. Appointed by Gov. George E. Pataki, Wayne retired as Superintendent of The New York State Police and then continued working with the law enforcement community by serving as The Commissioner of Public Safety/Deputy Mayor, under Mayor Gary McCarthy, for the city of Schenectady, New York. There, he worked alongside chiefs of police and fire to support residents of the Electric City.

Wayne was a man of unwavering integrity whose vocabulary did not include "assume" or "maybe." He developed several passions in his life outside of law enforcement. He enjoyed hunting, fishing, snowshoeing, and golf. In his younger years, he mastered the art of working with stained glass. However, his greatest joy came from being a father to his daughters and grandfather to his granddaughters. He made cupcakes for his kids, taught them how to fish, change tires, and be master assistants to home improvement projects. He routinely boasted of his children's accomplishments after proudly putting his three daughters through college.

Wayne's smile and "Wayne-isms" will be missed by several nieces, nephews, and friends. The family wishes to extend their deepest thanks to Dr. Lawrence Garbo, Nurse Practitioner Randi Daniels and the entire staff at NYOH. Never a person to wallow in regret, Wayne would ask you to consider the words of President Theodore Roosevelt, "Do what you can, with what you have, where you are." Move on and speak fondly of him. Keep his name and his wishes alive by contributing to your families and communities. Be neighborly and take care of those you love.