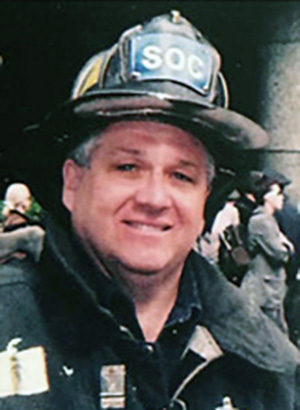 The loss of William St. George struck a chord with many Baldwin residents as well as firefighters throughout the county and New York City, who described him as a selfless man and a good friend. His family praised him as a doting father who, while active in the community and fire department, always made time for his family. "He was a loving, caring husband," his wife said at the service. "He was always there for each one of his kids. We had so much fun as a family."

St. George became director of the Nassau County Association of Fire Districts in 2007. He had served in the FDNY's Special Operations Command, where he was part of an elite group of firefighters who respond to unique fire and emergency situations. On Sept. 11, 2001, St. George played a crucial role in the aftermath of the terrorist attacks, and it was a day that haunted him in subsequent years, friends said.

St. George remained as active in the Baldwin community, serving as a PAL coach and president of the Baldwin Boosters Club and Friends of Baldwin Lacrosse, among other associations. He was always there cheering his children on at games, whether it was lacrosse, baseball or field hockey. "As each of his children grew and got into sports, he jumped right in," his wife said.
"He was involved in the community but never let it get in the way of his family," Liz said.

A man of principle
St. George was born on June 18, 1956, and was a lifelong Baldwin resident. He was the son of William V. and the late Marilyn St. George, and the brother of Jimmy, Bobby, Terry Tamburo and Kelly St. George-Walsh. A Baldwin High School graduate, he married Gail in 1978, having met her in school.

"We knew we'd spend the rest of our lives together," she said. Six of the greatest days in his life, she explained, were their wedding, the births of their children and the day he walked his Liz, who graduated from Baldwin High School in 1997, down the aisle to wed Brian Vaught.

"He was so proud of his children's accomplishments," Gail said.

St. George, whose father and grandfather were firemen, joined the Baldwin F.D. in 1977, and became a member of Hose 3. "It fit in with his general nature," said son Tom, a 2002 graduate of Baldwin High. "He always put [other] people before himself. He was very selfless."

At Hose 3, St. George rose through the ranks, eventually becoming the department's chief in 1988. Along the way, he formed strong bonds and friendships with his fellow firefighters. Longtime friend John Brown, chief of the Nassau County Service Academy, served with St. George there. A deputy chief instructor since 1986, St. George was known for operating live burn operations and classroom instruction, and for implementing a national certification program for incident safety officers.

In 1989, St. George joined the FDNY, where he served at Engine 79 in the Bronx and Engine 236 in Brooklyn. On 9/11, as part of the Special Operations Command, his resiliency proved crucial, and in 2002 he was awarded the World Trade Center Rescuer Medal.

St. George was known for his take-charge, straightforward attitude, and was the "king of multitasking," his wife said.

And though he was amiable, St. George was known for his blunt honesty. "He was never malicious, but he'd let you know what he thought," Liz said.

To his family and friends, he was more than a headstrong leader; he was a loving father and husband. His wife recalled the fun times at Nunley's and the vacations in the Poconos, saying that her husband was always ready to pack a cooler and take a trip.
He was a fan of the Beach Boys, his daughter said, which was ironic, since he hated the beach, but would go just because he knew it made his kids happy. "He knew we wanted to be there and wanted us to have a good time," said Tom. "He'd come with his newspaper, hat and beach chair."