Marijo was a beacon of hope and light to all who knew her. The world is a better place because she was a part of it.

I met Marijo on the 'Connection Jitney' I believe was the name of the downtown van that ran the circuit of Manhattan's southern tip: a blessing in winter as the taper of land, while narrow on the map, swelled into a windy vastititude in Battery Park where we lived.

I had only recently moved to the neighborhood; in crisis mode as often, most immediately fleeing rats in brownstone Brooklyn, but larger issues hovering too. Marijo, with her antenna for the wounded as well as simply liking 'people', reached out to me on our first encounter and remained a radiant fixture in my life, an adherer of souls as well as neighbors.

Marijo was my friend for over two decades--she used to come by to watch "Midsomer Murders" towards the end of our relationship. We spent many hours at various events, and especially dinner! I used to see her at least once a week--I miss her still!

I miss my inspiration

My dearest Marijo. Always first there for our students, faculty and staff, always courageous, always positive, honest and loving. Sadly, we also shared our common illness and she showed me how to live with it until you can't any longer.

I miss her and carry her lovingness in my heart and think of her every day.

My Mentor and Friend

Whenever I tell someone about my career in higher education. I always go way back to 1994 when I became President of NYU’s Inter-Residence Hall Council. When I began my year as President, I was informed that my advisor would be Marijo. From the moment I met her - my 6’2” compared to her….well, slightly shorter than me - I understood the power she had to bring people into her sphere, no matter if they were new to knowing her or not. She quickly became a confidant and mentor for me. When the time came for me to decide my future, she recommended I visit the MA in Higher Ed program at NYU, which I did, and the rest is history.

Marijo is THE reason I am where I am today. She gave me confidence, direction, and friendship that helped guide my life. No matter where I am, and no matter what I do, Marijo will always be a part of my life story.

Even though we fell out of contact, I always loved watching her successes at Pace and in her personal life with Mark and James. Her story continues even though she is no longer with us. I miss her but I know her soul is always present inside of me.

For all the kind things you’ve done for others!

Marijo would always make herself available to listen and solve any problem you had. Our fondest memory of Marijo is when we would talk every Friday , even during her illness. We would ask Marijo how she was doing, she would say

“I only want to know how you are doing. “People will never forget how you made them feel”
(Maya Angelou)

She loved Pace students, and they loved her. Personally, I never met a warmer, more supportive colleague. She can never be replaced.

It's hard to believe it is the anniversary of my friend Marijo's passing. She was a delightful friend and sympathetic ear, but she was also a force in our neighborhood. Her family is modest about it, but Marijo did more for lower Manhattan than can be measured. She was deeply involved in goings on at Pace University, Downtown Little League, the WTC Health Community Advisory Board, and so much more.

But she didn't just get the work done, she inspired everyone to think bigger and befriended everyone she came across. In turn she connected anyone she could to other people and resources to help them, strengthening and enriching our community in countless big and small ways.

Her legacy will be felt in all the positive changes she made that continue to benefit her neighbors, students, and loved ones. Those who she touched will never forget her warmth, humor, compassion, and positive energy. We will always miss her deeply. May she be an example to us all.

My friend, Marijo Russell O’Grady, was full of energy and possessed a zest for life unmatched. For those who did not know my friend, you missed so much. She was a mom, a wife, an educator, a friend and so much more to so many.   She had a way about her that mixed determination and commitment to advancing the betterment of others, whether it be for family, friends, students, staff  or strangers.

She resided and worked in lower Manhattan for over 20 years. She was in  her office the morning of September 11, 2001. On that date she experienced and was exposed to the horrors of that day.  As was her nature, she responded with swift speed to the deadly crisis.  Ensuring her loved ones along with students and staff were safe and secure.  Little did she know her health had been placed in jeopardy from those planes crashing into the buildings.

I met Marijo in the mid 80's at Rivier College (now University). Fresh out of grad school, Marijo lived in a dorm apartment and dove deep into supporting and enriching student life at Rivier. It did not take long for students, administrators and faculty to noticed this firecracker of a soul – wow, so full of ideas, extremely compassionate and always full of energy!

Marijo married my friend and mentor Mark which to this day warms my heart and makes me smile. Unfortunately, our communication through the years was spotty, so I did not know of her cancer. I love reading about Marijo's accomplishments and the lives she touched at PACE, lower Manhattan and beyond. Gosh, I miss my friend. I miss her smile and her laugh. I send my love to Mark & James!

I worked with Marijo at NYU…

I worked with Marijo at NYU for many years and learned so much from her. I was most affected by her can-do attitude. You could see it in her sparkling blue eyes - that determination to push forward while conveying clear empathy and practicality. It really was a quite unusual combination encapsulated in one dynamo of a person.

And, I laughed a lot!  That bawdy sense of humor was delicious. She was, as they say, a pistol. And, I feel lucky to have known her. Her warm spirit lives on.

Blessings to Mark, James and all who love and are touched by her memory.

With great fondness and respect,

In Remembrance
Photos of Marijo 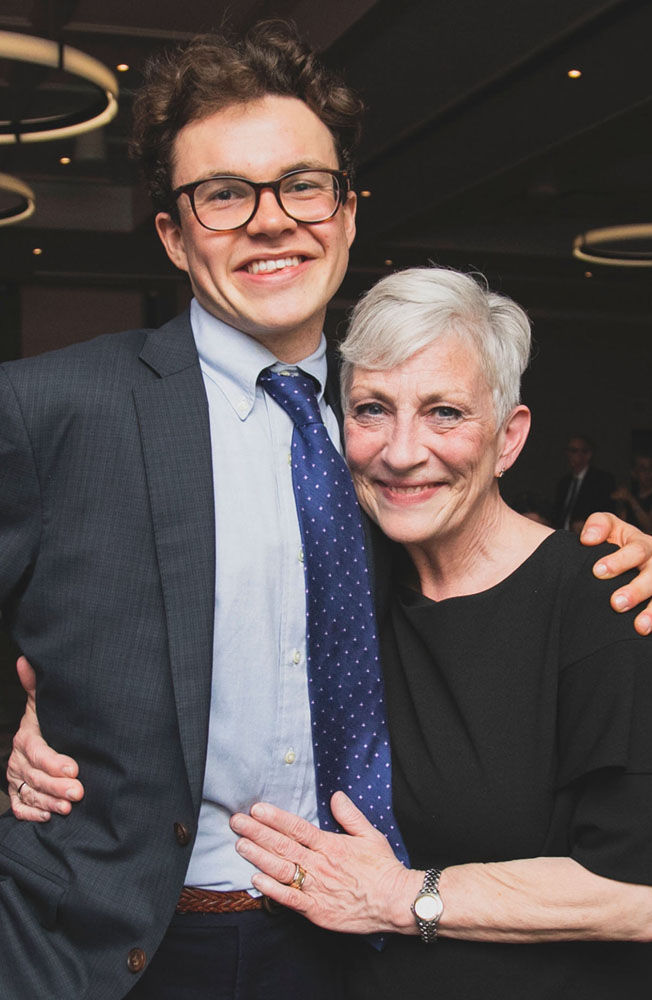 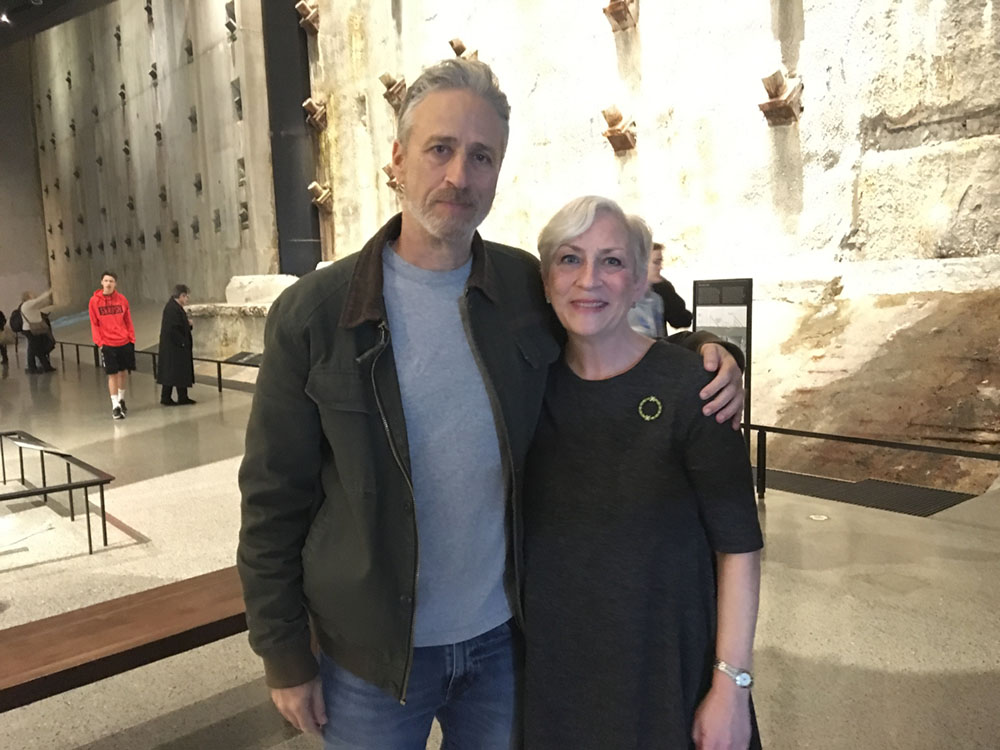 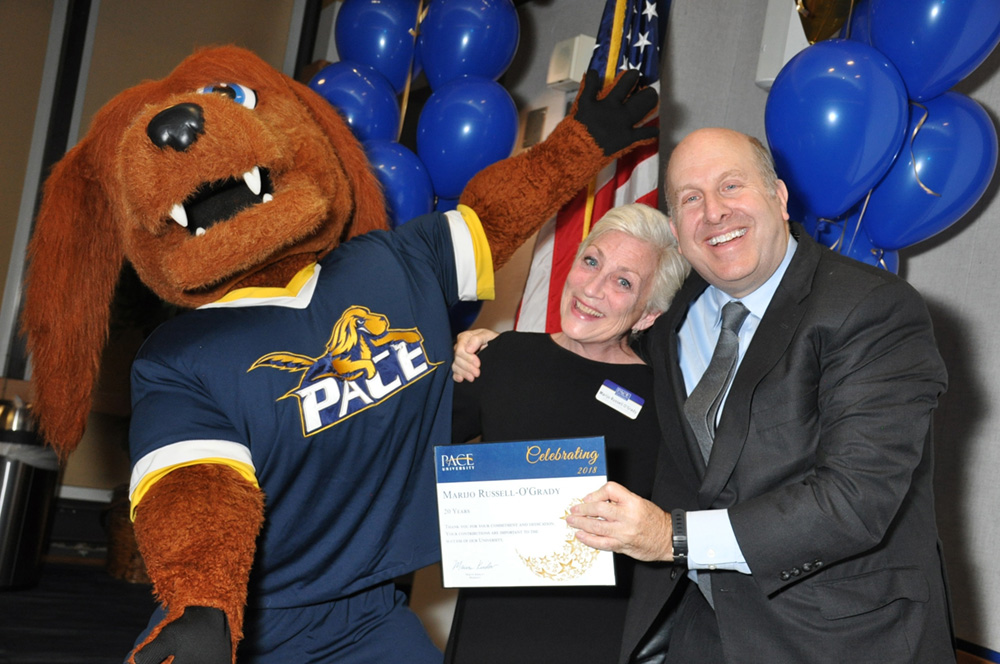 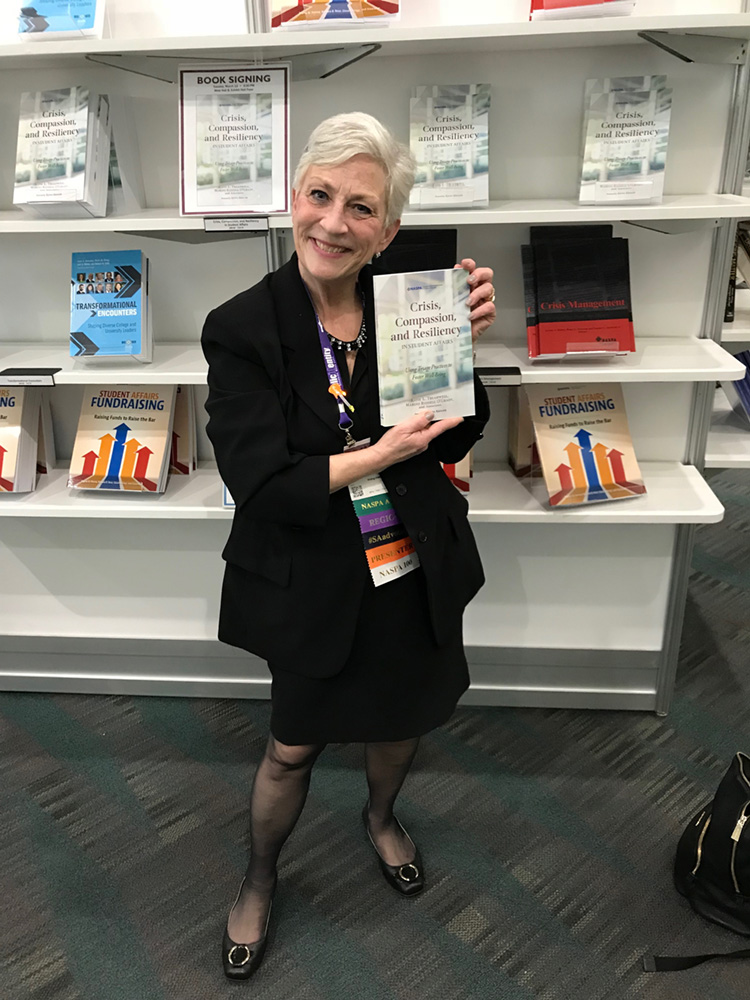 Dean O'Grady at the NASPA Launch of her book she coauthored, Crisis, Compasion, and Resiliency in Student Affairs 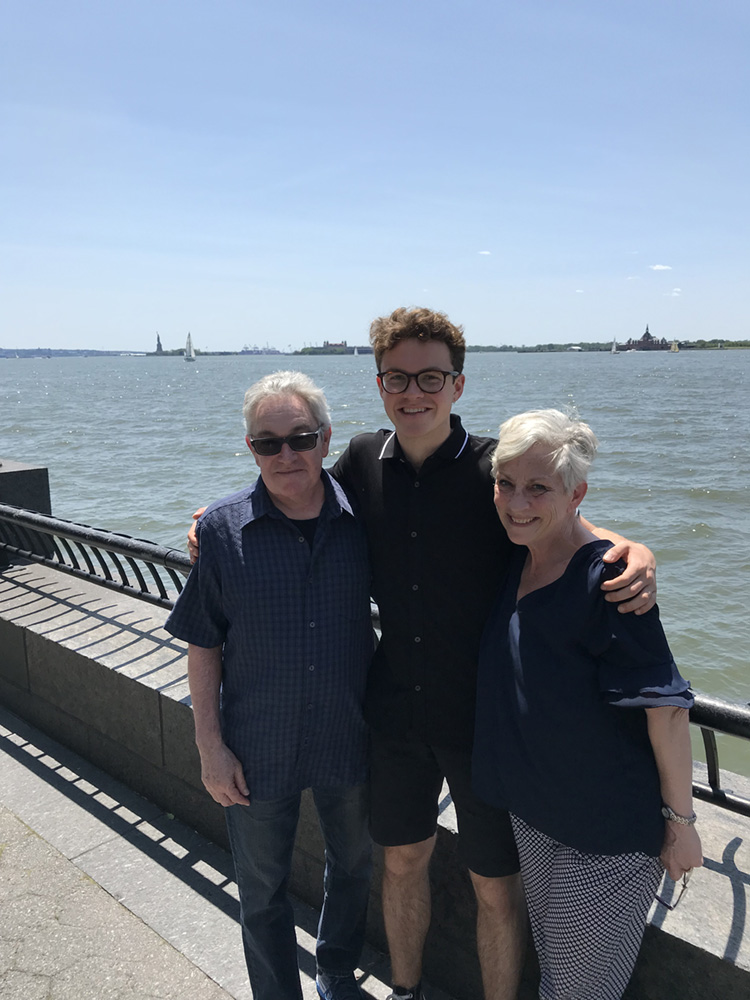 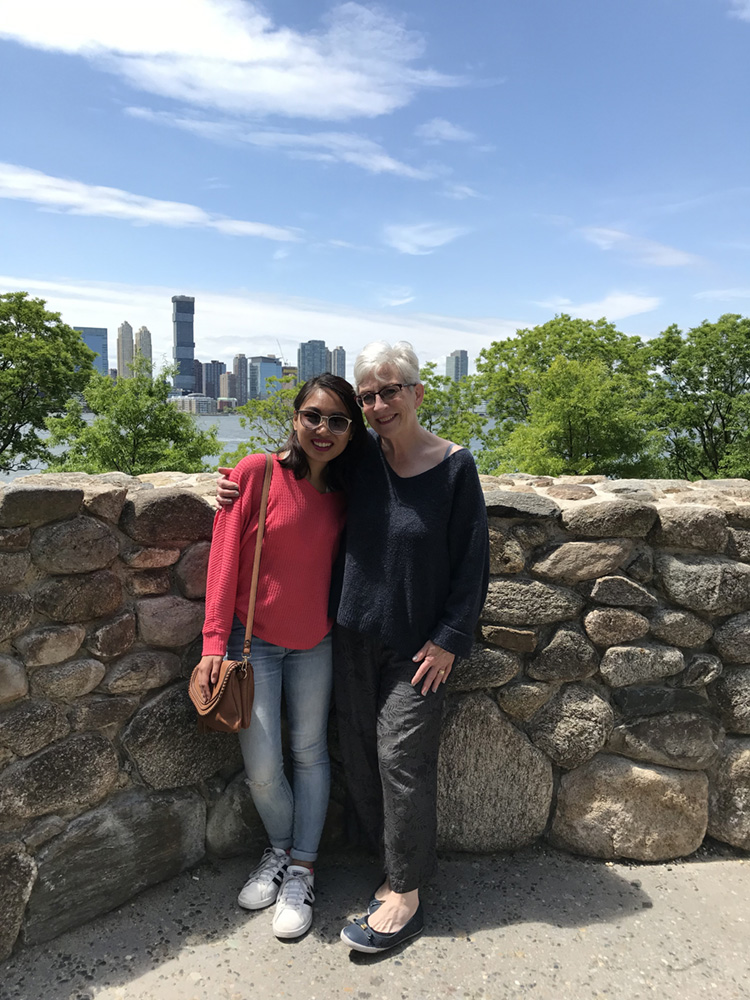 Marijo and neice Jennifer at the Irish Hunger Memorial 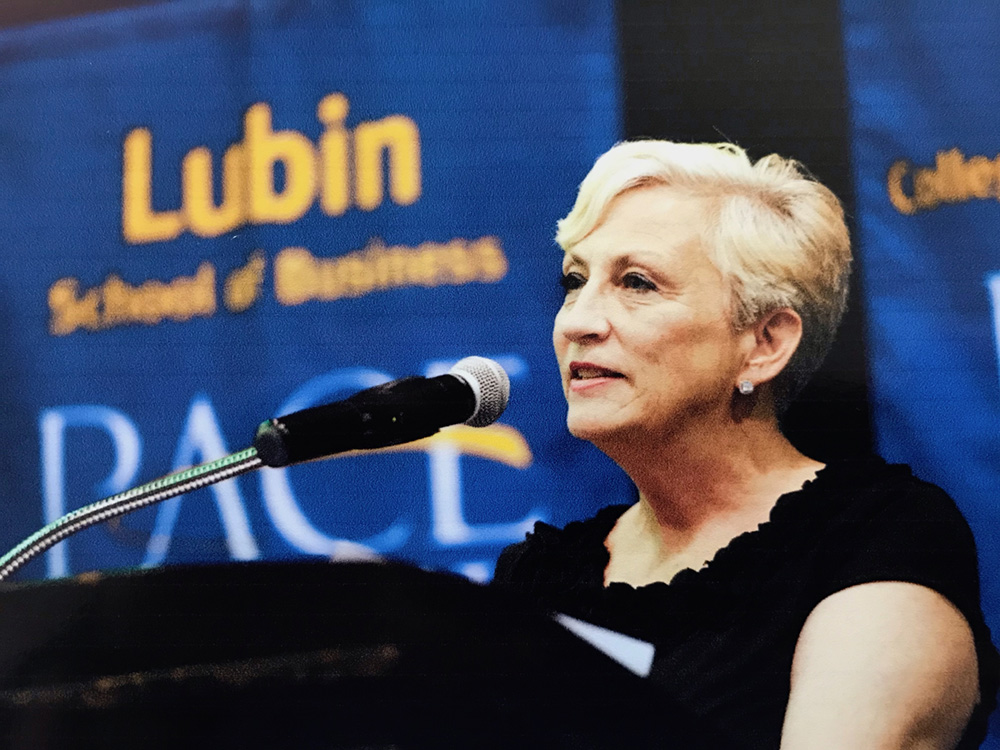 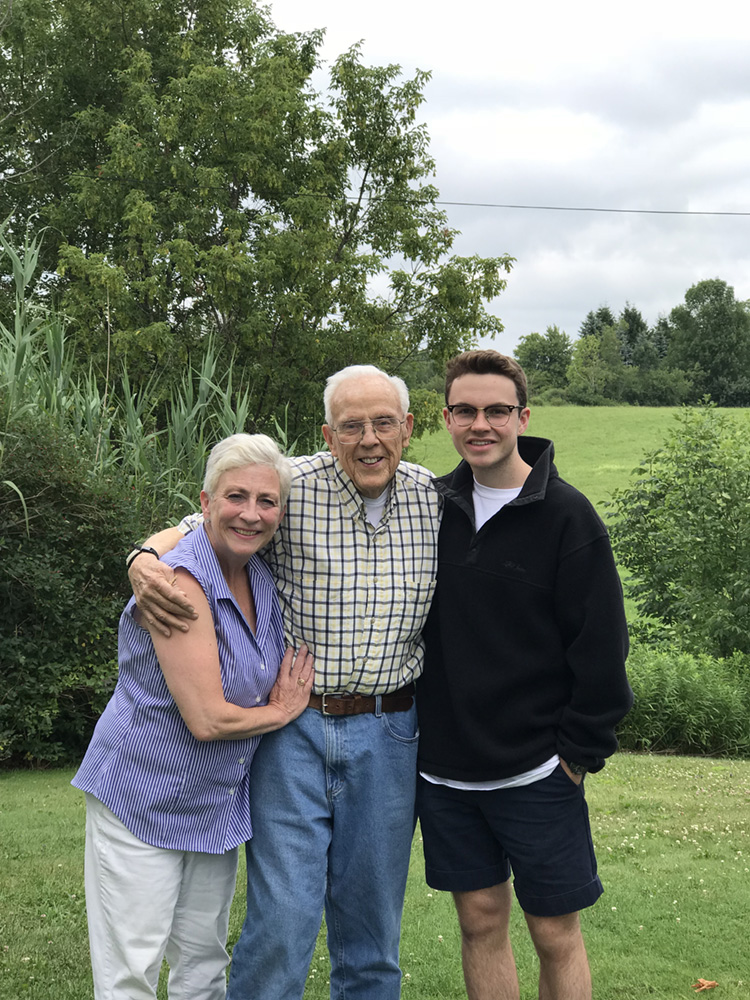 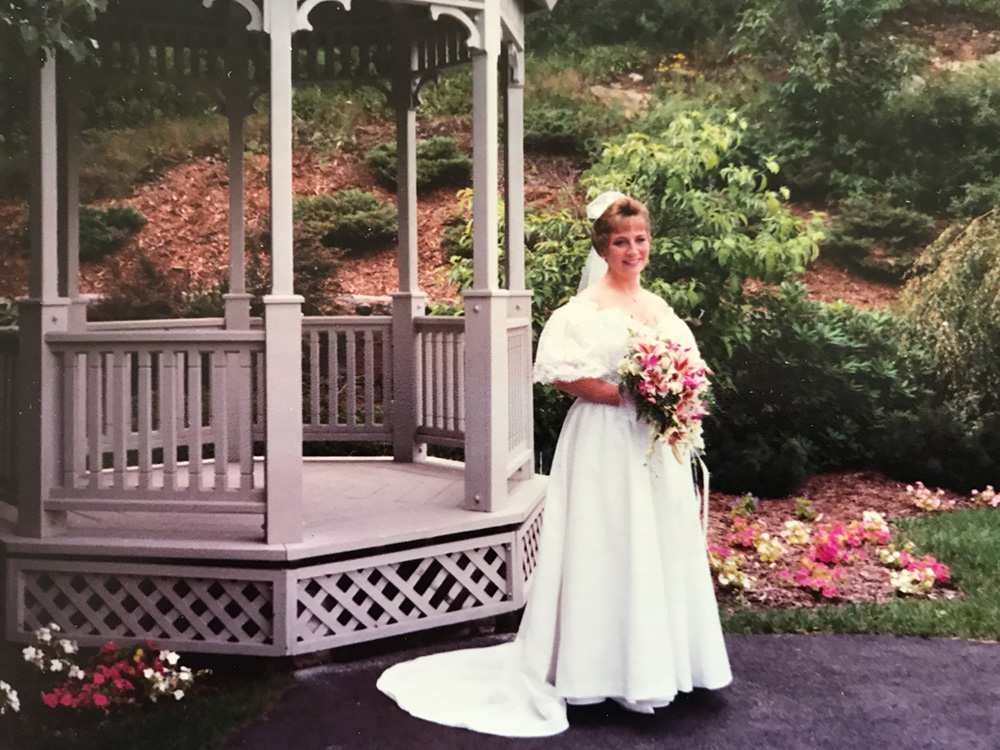 Marijo on her wedding July 1991 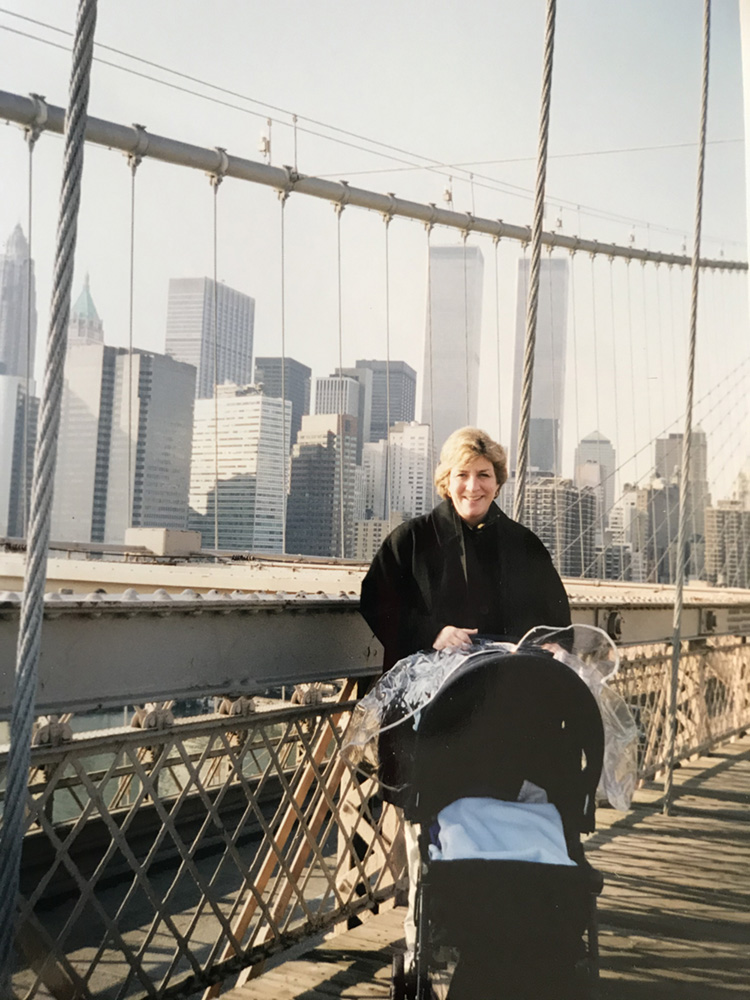 Marijo with James, New Years Day 2000 on Brooklyn Bridge with Twin Towers in the background 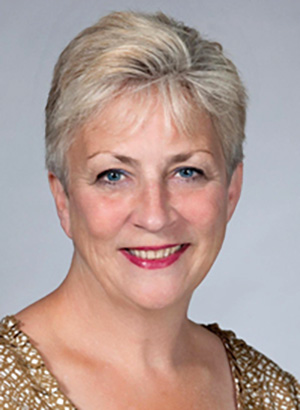 Marijo was born in December of 1960 in the small rural town of Sherman, NY. There is one school K-12, and no stop lights in Sherman. She was very proud of her town and often shared countless stories and pictures of Sherman and kept in close contact with many friends.

After graduation from Sherman Central School, Marijo went on to college and received her Bachelor of Science and Master of Science from Buffalo State University in Art Education with a concentration in Art Therapy. Early in her career she worked in Student Affairs at Massachusetts College of Liberal Arts in North Adams, Rivier University in Nashua, NH, before moving to New York City in 1989 to work at New York University and begin a PhD program in Higher Education Administration.

Since June 1998 Marijo served as the Associate Vice President/Dean for Students at Pace University in NY and oversaw the areas of Student Development and Campus Activities, Orientation, Housing and Residential Life counseling services, disabilities and wellness, Multicultural Affairs, the student information desk, and judicial affairs.

In 2001, she was awarded the Irish Voice, Irish Educator of the Year Award and by Pace University in 2016, the Bronze Jefferson Award, the Nobel Prize for Community & Public Service.

In March of 2019 Marijo co-authored and edited the book Crisis, Compassion and Resiliency in Student Affairs.

In 1991 Marijo married Mark O’Grady, a professor at Pratt Institute, there son James Russell O’Grady was born in 1999, and they lived, worked, and raised their family in lower Manhattan. Marijo was active in their community, serving on the board of the Downtown Little League, PS 234 Elementary School, the WTC Health Community Advisory Board, along with many other civic organizations.

She enjoyed cooking and while at Pace University she created the You Tube series Cooking With the Dean specifically for students to help them to learn to create healthy meals on a student budget. She also enjoyed gardening and was a member of the Liberty Community Gardens in lower Manhattan.

Marijo passed away after a recurrence of breast cancer in August 2020. She was a highly successful and respected Dean for Students, a devoted wife, caring mom, and true friend to all.

Born December 31, 1960 in Chautauqua County N.Y. and passed away after a (short/long) battle with a reoccurrence of breast cancer. Marijo had no regrets and lead a full and engaged life, she is remembered by all who encountered her.

She is a graduate of Class of 1979 from Sherman Central School and obtained a Bachelor of Science and Master of Science, 1983 and 1985 respectively, in Art Education with a Concentration in Art Therapy from Buffalo State College. She received a Ph.D. in Higher Education Administration in 1999 from New York University and worked in higher education at Massachusetts College of Liberal Arts, Rivier University, New York University and Pace University. She served as the Associate Vice President/Dean for Students at Pace’s Manhattan campus since 1998.

She co-authored a book, released March 2019 entitled “Crisis, Compassion and Resiliency: Using Triage Practices to Foster Well-Being”. She has been a member of NASPA since 1985, her professional organization, and has served on the NASPA Regional Board in various roles since 2011. She has served on the NYC DOHMH World Trade Center Health Registry Board since 2002 as Former Chair of its Community Advisory Board and until death, served on the WTCHR Scientific Review Board.

She was a long-time member of the Downtown Little League Board of Directors with a great love of volunteering with the Challenger League for Special Needs youth.

In 2001, she was awarded the Irish Voice, Irish Educator Award and by Pace University in 2016, the Bronze Jefferson Award, the Nobel Prize for Community & Public Service.

She leaves behind her husband of 29 years, Mark D. O’Grady, and the love of her life, her son, James Russell O’Grady. She is survived by her father Gerald W. Russell (92) sisters Kathleen Russell Babin, and her husband Bob, Jeanne Dorn and husband Jeff, Lynne Hayes and husband Rob, and in-laws Dr. Alan O’Grady and wife Sally Jean, Judy O’Grady Ciencewicki and husband Michael, Diane Ogasian and husband John, and many loving nieces and nephews.

She leaves behind many friends and colleagues and countless great memories.