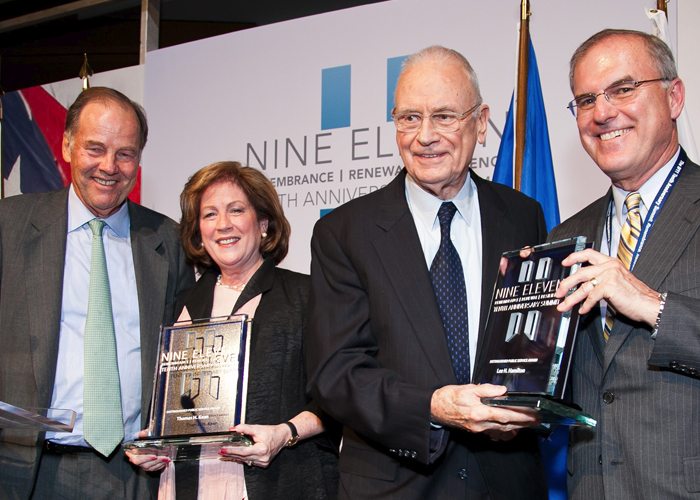 The 9/11 Commission was established in November, 2002 to assess the circumstances surrounding 9/11 and identify ways to guard against future attacks. Led by Governor Thomas Kean and Congressman Lee Hamilton, the Commission recommended sweeping intelligence reforms. Advocating for implementation of the 41 recommendations became a collaborative effort among the commissioners, the families and the congressional offices of Senators Joseph Lieberman and Susan Collins and Representatives Jane Harmon, Carolyn Maloney and Christopher Shays.

Also in 2002, 9/11 family members formed the Family Steering Committee to demand a congressional joint inquiry into intelligence failures that led to the attacks on 9/11. When testifying before congressional committees, VOICES co-founder, Mary Fetchet, stated, "It is our moral obligation to be sure that our government is doing everything they can to make sure this is a safer country, so that no one else is walking in my shoes."

Co-founder Beverly Eckert, who lost her husband Sean Rooney, also testified, saying, "In the days that followed (9/11), I felt somehow infused with his courage and strength, and that helped me persevere through the difficult months that followed. So many family members were similarly inspired. Despite our private anguish, we shared a goal to make this country safer so that the deaths of 3,000 people could not be meaningless."

In 2014, the former 9/11 Commissioners, led by Governor Thomas H. Kean and Lee Hamilton, reconvened to reflect on how the world has changed since September 11, 2001, to assess the current terrorist threat on the United States, and to agree on recommendations for improving U.S. national security. The result of their work was "Reflections on the Tenth Anniversary of The 9/11 Commission Report."