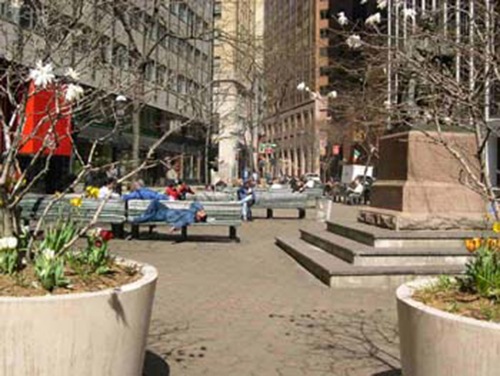 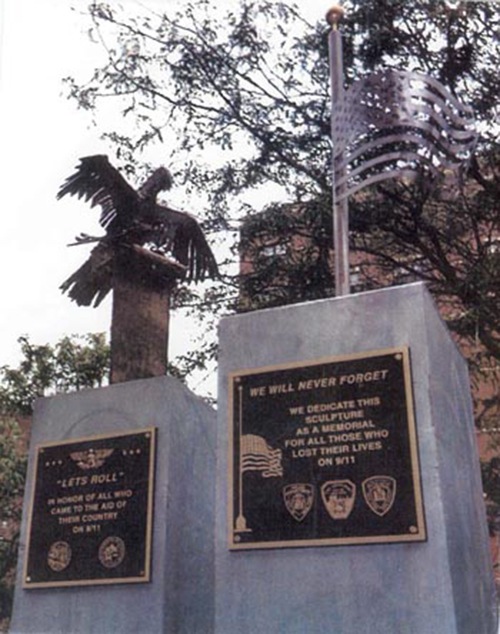 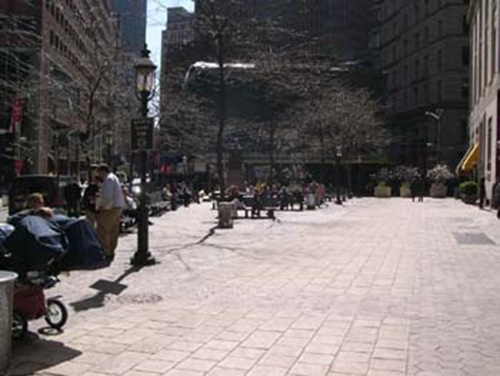 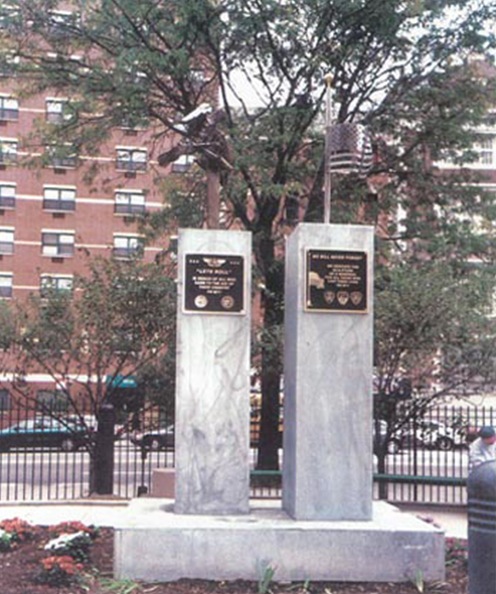 The memorial garden represents not just the 67 British victims of 9/11, but also those from all 54 Commonwealth countries, including Australia and Canada.

The British Memorial Garden at Hanover Square Park in New York honors the 67 British victims of the World Trade Center attacks. The idea for the garden in the heart of Lower Manhattan was conceived after 9/11 by Camilla G. Hellman, president of the British Memorial Garden Trust, Inc. Camilla was in New York on 9/11 and experienced the loss of a personal friend. She felt it was important for families visiting Ground Zero to also have a chance to visit a peaceful place in Lower Manhattan that would evoke a sense of enclosure. Camilla immediately thought of a British garden. "I wanted something that had a permanent legacy," she said. "I wanted to do something that would mean something to everybody." The garden is also dedicated to celebrating the strong historic ties of friendship and unity between the United States and the United Kingdom, Hellman said. A gift to the people and city of New York from the Anglo-American community and friends, the garden was funded by donations from individuals, corporations and foundations. Under the auspices of the British Memorial Garden Trust, Inc., which has the royal patronage of Prince Charles, a fund-raising campaign was launched in 2003 to build and maintain this important international initiative. Ground was broken on the $6.75 million project in 2005 and the garden opened to the public in the summer of 2007. Before, Hanover Square Park was a rather austere place. Now, it's been transformed into an inviting oasis of trees, flowering plants, stone benches and curving pathways. The British Memorial Garden was designed by Isabel and Julian Bannerman, leading British landscape architects who are best known for their work for Prince Charles, the Prince of Wales. All of the garden's elements come from the United Kingdom, including stone from Scotland and Wales and benches of English stone manufactured in Northern Ireland. The stone carving in the garden, including the county map of Great Britain, was done by British sculptor Simon Verity. A British Memorial Garden sculpture to "Unity" will anchor the garden and will be created by British artist Anish Kapoor. Landscaping began in the spring of 2007 and continued this past autumn, with the planting of 7,000 bulbs that will bloom this spring. Hanover Square, a one-half acre public park in New York's Financial District, dates back to colonial times and was named for the British House of Hanover. For many years, it was the center of New York's commodities market. The Square, which is actually triangular in shape, is bordered by Pearl Street, Stone Street and a street named Hanover Square. At the Square, the British Memorial Garden Trust, Inc. presents a program of cultural events that are free to the community. The events are designed to promote British heritage and help revitalize the Lower Manhattan neighborhood. On Friday, April 4, 2008, a pipes and drums concert will be held in the Square to celebrate Tartan Week. Since 2003, a 9/11 Memorial Concert has been held at Hanover Square Park each September 11th; the next one is scheduled for Thursday, September 11, 2008. Other public events have included a holiday caroling concert and tree lighting ceremony, and performances by the Royal Marines Brass Band and Welsh choirs for St. David’s Day. Typically, upwards of 200 people attend each event. Purpose: According to the British Memorial Garden website, "The Garden is intended both as a living memorial and as a place of solitude, comfort and reflection; a truly British garden drawing from the many wonderful elements of the historic gardens of Britain. It will be a gift to the people of New York, a place for the community to enjoy and experience the historic friendship linking the two nations. The Garden will also offer a place for the British community to hold annual Remembrance Day observances and reflect upon recent events and shared tragedies." Chairman of the Friends of the British Memorial Garden Camilla Hellman added that "people need to feel that the garden renews them, it's not a gravesite. The project grew out of 9-11 and honors the victims of 9-11, but it also honors the unity of Great Britain and the United States." Furthermore, as a British garden, it is designed to be a whole environment that is enclosed and beautiful. Everything from the stone to the bollards to the fence posts is created with British materials and designed with a British identity. It is also designed to promote unity amongst the different peoples of the United Kingdom. Reason site was selected: After September 11th, Hellman visited sites all over New York City in search of an appropriate location for a garden. Although Battery Park was suggested, Hellman felt that this area was already quite full of memorials to various events and groups. She discovered Hanover Square in Wall Street and found the space to be enclosed and appropriate, only later learning of the rich British and American Heritage that this site held. It was named Hanover Square during British colonial times, as inspired by London's Hanover Square. It became a residential, publishing, and retail center of Manhattan in the 18th century. Today, it will become a part of 14 rehabilitated parks in Lower Manhattan, including several that are being designed to promote access to the East River. Events planned for site: The British Memorial Garden will be used for annual 9/11 Memorial Concerts, Remembrance Day events on November 11th, as well as Tartan Day Concerts in April and a "Victorian Celebration" for the holidays in December and other cultural events. Surrounding businesses and local residents have formed a Community Liaison Committee to help shape future programming for the site. The garden will be used ever day for sitting, relaxing and reflection. Do you believe your memorial is a sacred place?: Hellman responded that "Ground Zero is sacred," and she did not believe the site was sacred. Rather, "it's a jewel that has to be treasured. You want to make it important to people so they embrace it; it has to be open to everybody."